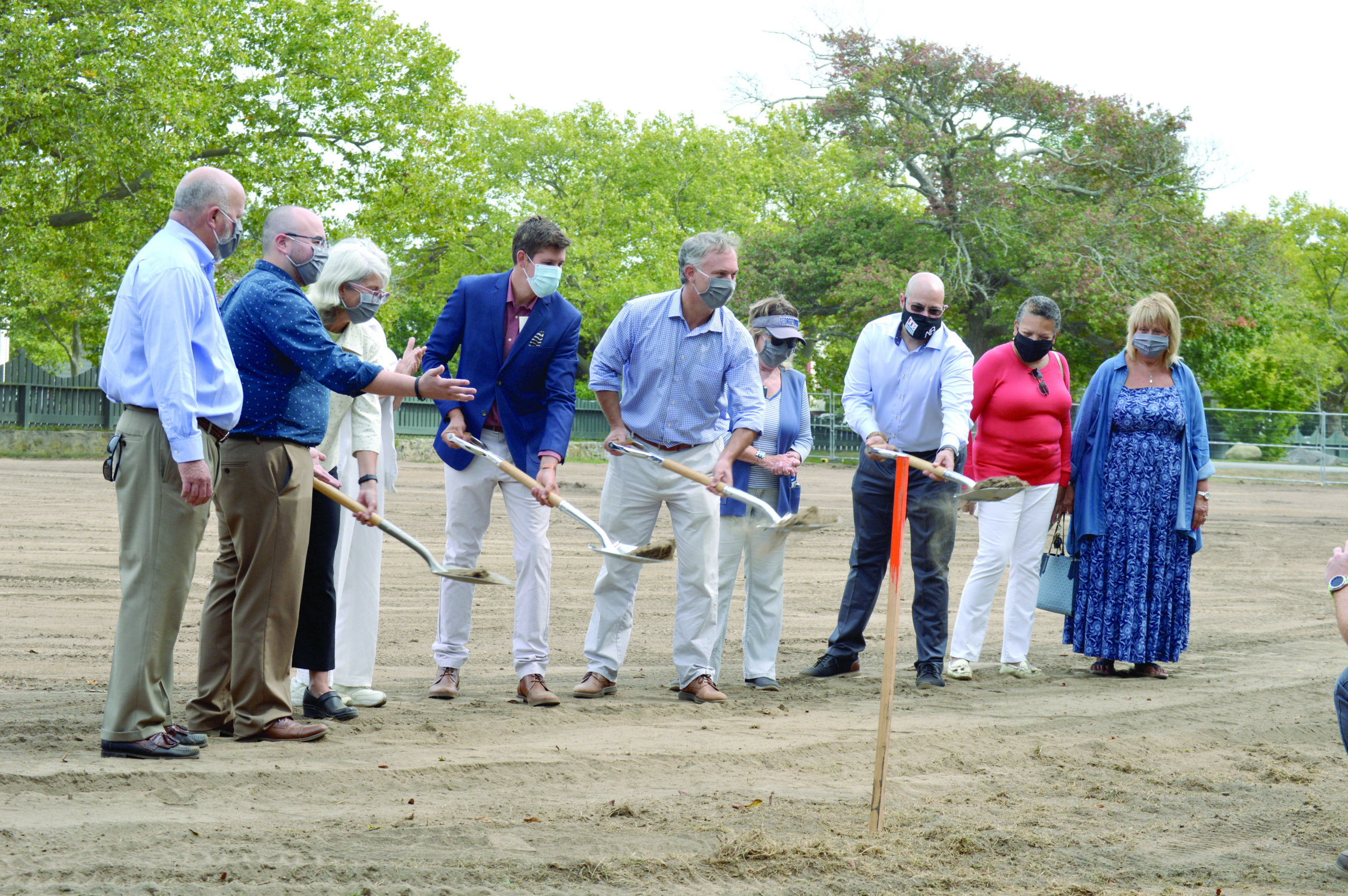 City officials, community organizers and lawn bowling fans were among the crowd at the groundbreaking ceremony for the bowling greens at Hazelwood Park. The greens are being restored and will be ready for play starting in spring 2021.

This article originally appeared in the October 2020 edition of Senior Scope. Article and photos by Seth Thomas.

In a year where the public has learned to accept cancellations, closures and delays, there was one project that never lost momentum: the restoration of the bowling greens at New Bedford’s Hazelwood Park.

The project had gained so much momentum, in fact, that Mary Raposa, the director of New Bedford’s Parks, Recreation and Beaches Department, had to wave down construction workers who were busy flattening the field so the mayor could deliver his remarks during a groundbreaking ceremony on Sept. 17.

One of the goals of the project was to attract casual and serious players alike. Once completed, the public will be able to lawn bowl and play croquet on the greens, and the space will be a destination for tournaments. The fields should be ready by next spring.

The bowling greens had initially opened in 1920, and lawn bowling remained popular in the City for decades. The public’s interest eventually waned, and the sport was largely abandoned, save for one youth group, Youth Opportunities Unlimited, who for the past 16 years biked to the park to play. JoAnn Tschaen, who founded the kids’ organization, first explored the possibility of restoring the greens.

It wasn’t long before others took notice. Local organizers from the Friends of Hazelwood Park as well as the New Bedford Parks and Rec Department joined the effort. The project piqued the interest of groups outside the city as well, including the Marion Mallet Club and Bowls USA, a national organization that governs the sport in the States.

Part of the excitement stems from the fact that bowling greens are something of a rarity in the region. Alan Bell, who lives on the Cape, said that if he wanted to play, he would have to travel to West Hartford, Connecticut.

“It’s to a sport where you can’t just play anywhere; you have to have bowling-green quality grass to play on,” he explained.

Bell, who’s originally from Edinburgh, Scotland, began playing when he was 12, and he would head out to the greens to play about three or four times a week.

“It’s a sport that requires a lot of skill to be at the top level,” said Bell. “America doesn’t know much about it, though. There’s a lot of money in it in Europe, Australia, even in Canada. It’s part of the Commonwealth Games.”

After it launched 100 years ago, the greens at Hazelwood Park could draw a crowd, even if most Americans hadn’t heard of the sport. Jane Britto remembers playing in father/daughter tournaments with her father, Arnold “Arnie” Oliver, when the sport was at the height of its popularity in New Bedford.

“They had all sorts of tournaments and trophies for teams,” said Britto. “It was quite busy. There used to be all kinds of people standing around, looking over the fence watching.”

During the groundbreaking ceremony, which drew a crowd of lawn bowling aficionados dressed in white, New Bedford Mayor Jon Mitchell thanked the numerous contributors who funded the project, which cost just under $400,000. Funding came from the Community Preservation Committee, New Bedford Day Nursery, and Senator Mark Montigny’s Children’s Fund. More than $180,000 came from private donations – $100,000 of which came from one anonymous donor. 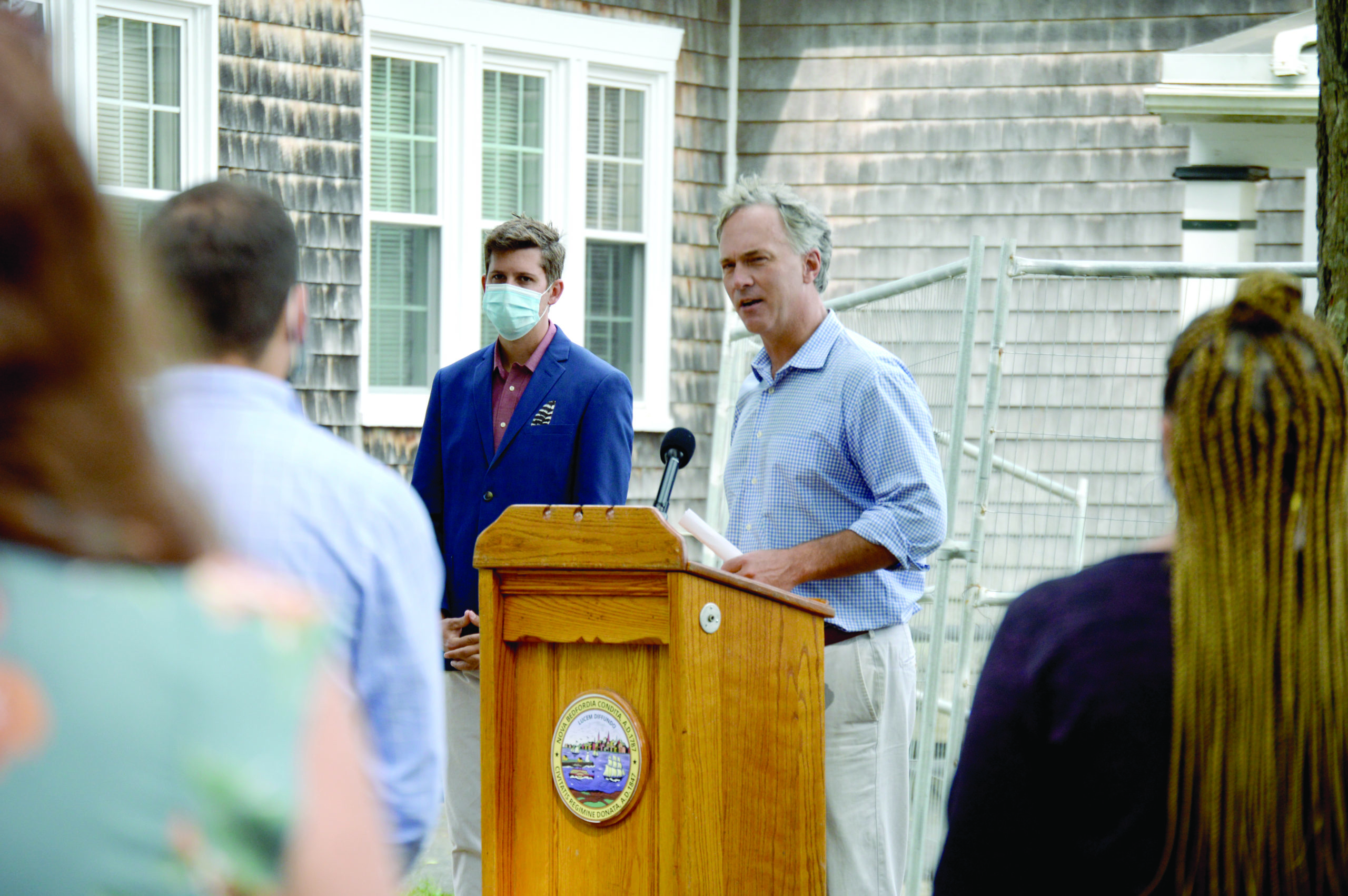 New Bedford Mayor Jon Mitchell thanked those who donated to the restoration project during the groundbreaking ceremony.

“We appreciate every last dime that came in,” said Mitchell, to a masked crowd outside the Rosemary S. Tierney Community Center. “There’s a lot to be said for the power of residents coming forward to do something important and government to be there with them to make it happen.”

Next year, the public will be able to make reservations in the greens through the Parks and Rec Department, and there will be equipment available for those who don’t have gear. The Friends of Hazelwood Park will manage tournaments, and funds from those tournaments will be used to maintain the greens.

Raposa said the Parks Department was especially interested in the project because many different kinds of people will be able to play on the greens.

“Lawn bowling and croquet are such accessible sports,” said Raposa. “They’re sports that youth and senior citizens can play together.”

As the groundbreaking ceremony concluded – and the construction workers returned to their noisy machinery – Tschaen reflected on the project.

“I’m grateful that people, especially during these troubled times, can come together with a common vision and make life a little better in this city,” she said.