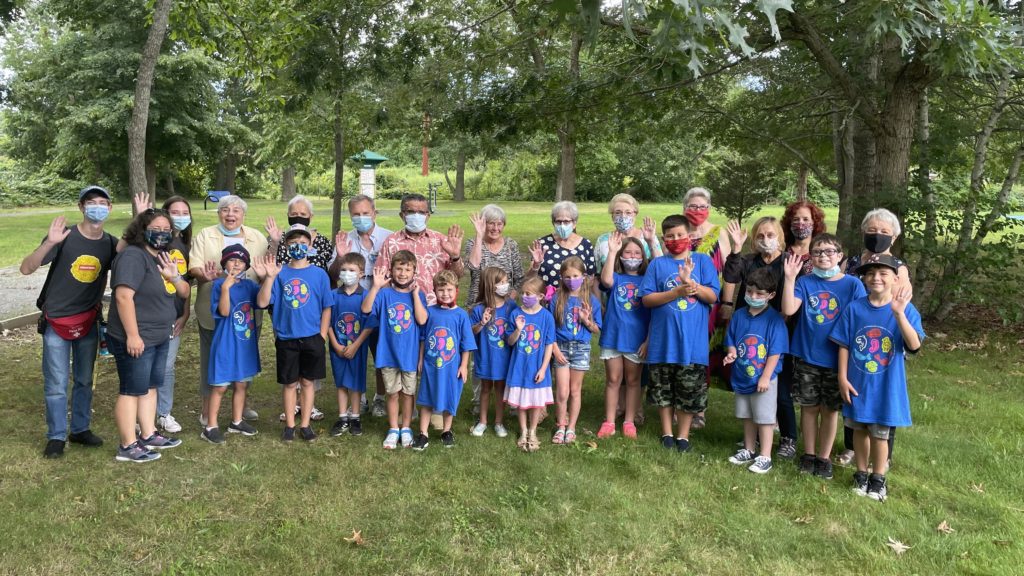 During July and August, about a dozen students from the LeRoy L. Wood Elementary School’s Champions summer program wrote letters back and forth with patrons of the Fairhaven Council on Aging. After six weeks of corresponding through letters, the two groups met in person on Aug. 20, on the last day of the school’s summer program.

At one point this summer, Mary Jane Richard happened upon a blue jay feather outside her home in Fairhaven, and she knew just what to do with it: mail it to her seven-year-old pen pal, Camille Rebelo.

Richard and Rebelo had been sending one another hand-written notes throughout July and August, and Rebelo used the opportunity to write openly about the things she loves – roses, candy, birds – which prompted Richard to send along the feather in a correspondence.

The pen pal project came about through the Fairhaven Public School District’s Champions program, a national after-school and summer program. In the wake of the pandemic, the Champion’s curriculum incorporated a lesson on empathy.

“Champions realized that seniors were especially affected by COVID,” said Mandy Bonille, the site director for the LeRoy L. Wood Elementary School’s Champions program. Bonville said Champions encouraged students to engage with their local senior centers. Rather than having the children, whose ages ranged from 5 to 10, drop by to visit once, Bonille wanted to take the project a step further.

About a dozen students spent six weeks writing back and forth with Fairhaven COA patrons. For some of the children, especially those who just left preschool, the activity was an opportunity to become more familiar with the alphabet and sentence structure.

“I think it’s good for the kids. Especially when it comes to writing thank-you notes,” said Richard. “It’s so important for kids to learn that they have to thank someone who has given them something.”

After six weeks of corresponding back and forth, the project culminated in a meet-and-greet event, where the authors were able to meet one another at the COA. When the children walked through the doors of the senior center on Aug. 20, they instantly lit up the room. The children introduced themselves and ate snacks with their pen pals. Even with masked faces, it was evident the room was filled with smiles.

When Geri Giusti and student Sophia Riley Ellis met at the center, they hit it off right away. Giusti said she had a hunch they had some things in common.

“I think we figured it out the moment we met each other. I asked her if she liked being in charge, and she said ‘yes.’ That’s how I like to be, too,” she said with a laugh.

“That’s why we’re the perfect pair,” Ellis chimed in.