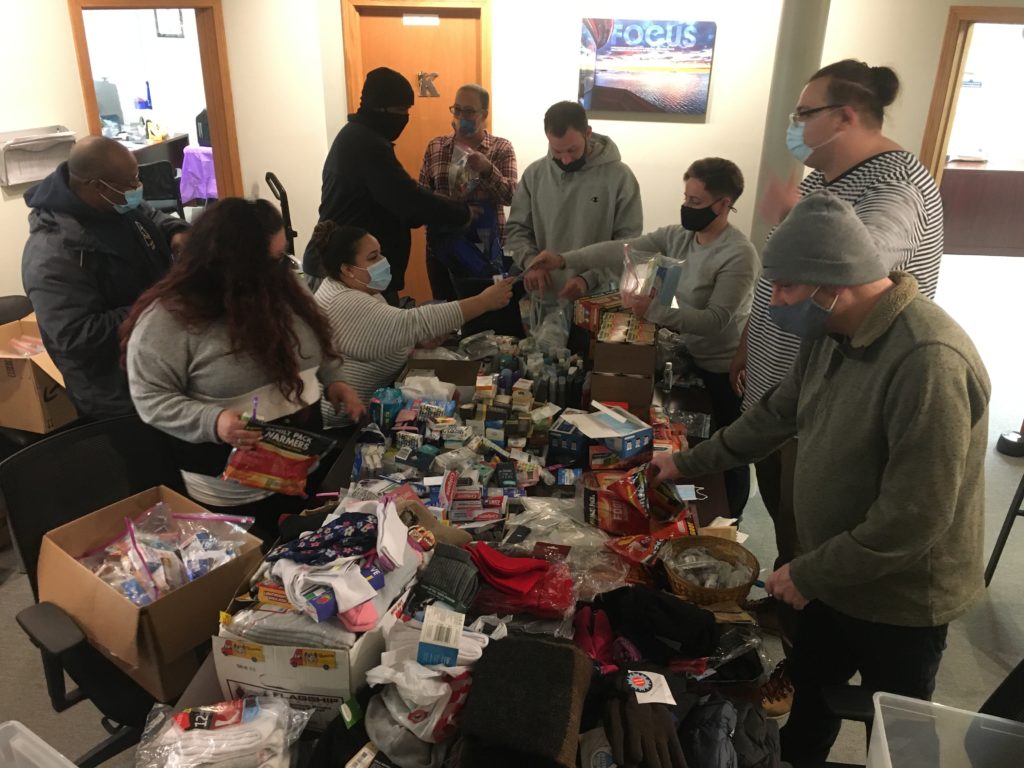 A group at Steppingstone Inc. fills plastic bags with toiletries, which will be handed out as part of the Point-in-Time Count.

This article originally appeared in the February 2021 edition of Senior Scope. Article and photo by Seth Thomas.

The PIT Count, which happened throughout the nation at the end of January, helps communities secure funding to address homelessness from the U.S. Department of Housing and Urban Development.

The count collects data on homeless individuals who are both “sheltered” (which includes emergency shelters and transitional housing) and “unsheltered” (those living in a place not intended for human habitation, such as a car, outdoors or in a public building).

Without being able to rely on volunteers, some communities may struggle to cover their geographical area. But HUD has facilitated waivers, allowing communities to conduct the count across multiple days rather than one night.

New Bedford’s count was conducted by a small outreach team from Steppingstone Incorporated rather than the dozens of volunteers who usually assist in the endeavor. The resource fair that coincides with the count was also canceled on account of COVID.

Last year, 398 homeless people were counted in New Bedford, 48 of whom were living on the streets. The remaining 350 people were either living in emergency shelters or in transitional housing programs. According to data collected from the past decade, there has been a relatively stable number of homeless individuals living in the city, typically ranging between 350 and 450 people.

Set amid the post-holiday surge in COVID cases, this year’s PIT Count comes at a time when families around the nation are grappling with the economic toll of the pandemic.

According to the latest data from the U.S. Census Bureau’s Pulse Survey, which has tracked how households have fared throughout the pandemic, about a quarter of Massachusetts residents reported that they were living in a household “not current on rent or mortgage where eviction or foreclosure in the next two months is either very likely or somewhat likely.” A third of respondents said they were struggling to pay usual household expenses because of the pandemic.

Since the early days of the pandemic, the federal government has provided temporary relief through an eviction moratorium, which initially protected some renters from evictions. The moratorium began with the original CARES Act back in March 2020, and was later extended through Jan. 31. Hours after President Biden was sworn into office, he signed an executive order extending the moratorium at least through the end of March.

Danielle Isom, the project manager at Steppingstone who has participated in the PIT Count for years, said she worries that once the eviction moratorium is eventually lifted, it will drive more people into homelessness.

The Metropolitan Area Planning Council’s “COVID-19 Layoff Housing Gap” report, last updated in October, warned that “without federal, state or court intervention, Massachusetts is likely to see a significant wave of evictions and foreclosures in the coming months.”

Joshua Amaral, the assistant executive director at People Acting in Community Endeavors (PACE) and chair of HSPN, said that while housing in Boston is notoriously expensive, housing in New Bedford has become increasingly unaffordable over the past decade.

“You can’t relocate because there is nowhere you can go that’s cheaper,” said Amaral. “And I think people are forced into undesirable situations, whether that’s homelessness, rooming with other people or couch surfing.”

Moreover, as the cost of rent has increased, wages have not kept pace. According to a 2020 report from the National Low Income Housing Coalition, the national average of what a full-time worker would need to earn to afford a modest one-bedroom apartment is $18.65. Seven of the 10 occupations predicted to grow the most over the next decade do not provide that wage, the report notes.

MPAC offered several possible solutions, including additional funding for rental assistance, support and incentives for landlords and tenants to negotiate plans outside of court, further legal assistance and foreclosure protection for landlords affected by missed payments.

With the rollout of the vaccine happening at a slower pace than anticipated, the pandemic will continue to impede on everyday life – and the economy.

“It all travels downhill,” said Clarke. “For the tenant who has been affected by the loss of a job or is underemployed or has a health issue… how on earth do you get out of that hole?

For more resources and information on rental assistance, click here.