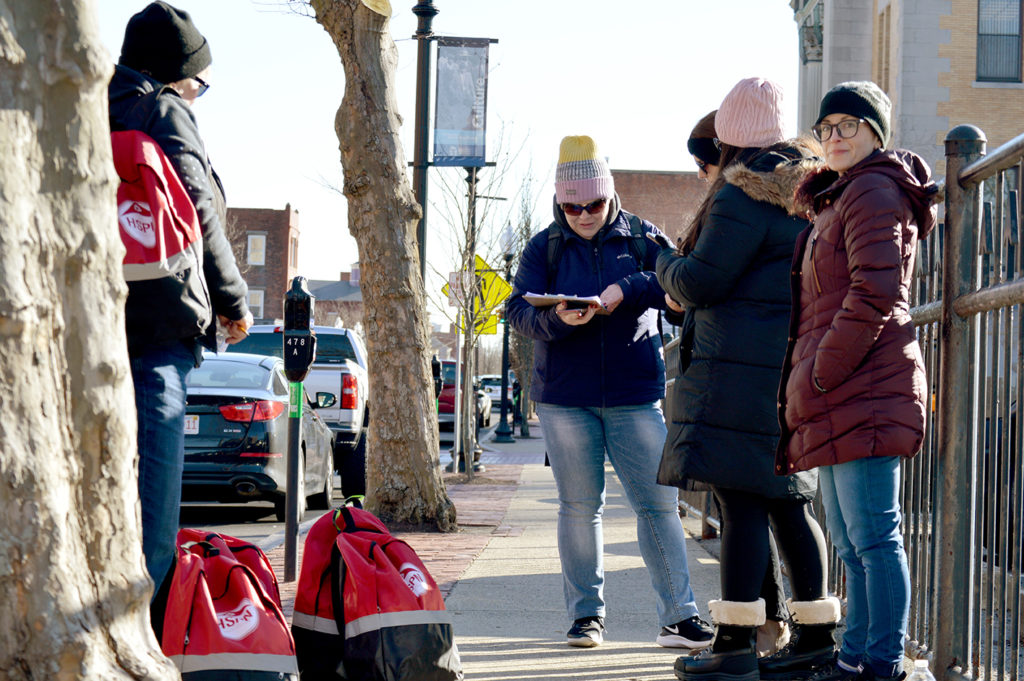 The Point-in-Time Count occurs during the final 10 days of January across the nation. The count tracks the number of homeless people living in a given community during a 24-hour period. The City of New Bedford conducted its count on Jan. 29 into Jan. 30. Above: Volunteers gather in the downtown area on Jan. 29.

This article originally appeared in the March 2020 edition of Senior Scope. Article and photo by Seth Thomas.

Late in the afternoon on Jan. 29, several pedestrians walking around downtown New Bedford had red-and-black backpacks slung around their shoulders. The backpacks, emblazoned with an “HSPN” logo, were stuffed with an assortment of toiletries and distributed as part of the Point-in-Time Count, the process by which the federal government identifies homeless individuals and families.

The count helps communities secure funding for homeless assistance from the U.S. Department of Housing and Urban Development (HUD). The process occurs nationwide during the final 10 days of January, and each community will perform the count across a 24-hour period.

During last year’s count, 397 planning bodies across the country, referred to as “Continuums of Care,” provided data to HUD. In New Bedford, the Continuum of Care is HSPN, the Homeless Service Providers Network.

“One of the misnomers is that HSPN, by virtue of the name ‘Homeless Providers,’ is just nonprofit providers and case managers,” said Jennifer Clarke, a deputy director of community development for New Bedford. “We are very fortunate in New Bedford to have a diverse network of people.”

Clarke said HSPN is comprised of representatives from numerous fields, including health care, business, education, faith organizations, among others.

“When you’re having a conversation as a community, as a Continuum of Care, it’s critical to have all those different perspectives at the table because it makes for a far more robust – and realistic – conversation,” she said.

The Point-in-Time count collects data on homeless individuals who are both “sheltered” (which includes emergency shelters and transitional housing) and “unsheltered” (those living in a place not intended for human habitation, like in a car, outdoors, in a public building or an encampment).

HSPN enlisted about 60 volunteers to take part in this year’s Point-in-Time Count, and groups of three or four were given designated parts of the city to search for unsheltered individuals or families. Waves of volunteers searched the streets through the afternoon and evening of Jan. 29 and into the morning of Jan. 30.

“We want to minimize the amount of people we have on the streets and get them into shelters,” said Dina Melo, director of talent management and recruiting at First Citizens Bank, who helped coordinate volunteers during the count. “It’s important that we have accurate numbers, which helps fund the agencies that provide services.”

Data from New Bedford’s 2020 Point-in-Time Count will be released later this year. Over the past decade, the total count of homeless individuals living in the city has remained somewhat stable, ranging from about 350 to 450 people. Last year the number was 433, 53 of whom were unsheltered.

Early this year, HUD released an assessment report that included national data from the January 2019 count. HUD identified 567,715 homeless people across the country – about two-thirds were staying in sheltered locations and about one-third were unsheltered.

“As we see the gap widen between higher-income and lower-income people, housing becomes more of a prevalent issue at a national level,” said Clarke. “Housing is inextricably linked to everything else in our lives.”

What drives homelessness in America remains a complex issue, but researchers have looked at wages not keeping pace with the cost of housing as a major contributor.

A 2020 report from Harvard University’s Joint Center for Housing Studies found that, since the Great Recession, new rental construction has concentrated on high-cost units. As the cost of development increases, so, too, has the rent. As a result, “10.9 million renters – or one in four – spent more than half their incomes on housing in 2018,” which has “led to an increase in homelessness, particularly in high-cost states.”

Researchers from Princeton University’s Eviction Lab estimate there are nearly a million evictions against tenants happening around the country every year, with approximately 43 evictions happening in Massachusetts per day.
Point-in-Time Count organizers hope the process will bring awareness to the changing demographics of homelessness as well as combat stereotypes of what it means to be homeless in America.

“When people from the community volunteer, it helps change their perception of who a homeless person is,” said Leslie Poulin, senior director of marketing at First Citizens, who helped organize the count. “It can be someone who lost their job and they can’t afford the rent or their mortgage. They may not have family nearby that can support them, so they have no choice but to leave their home.”

If you are in need of help, HSPN publishes an annual Street Sheet, which provides a wide range of resources. Copies are available throughout New Bedford, including the library. Visit www.nbhspn.com for the most up-to-date Street Sheet or call 508-979-1500.