Project Independence is ‘Looking Forward to a New Day’ 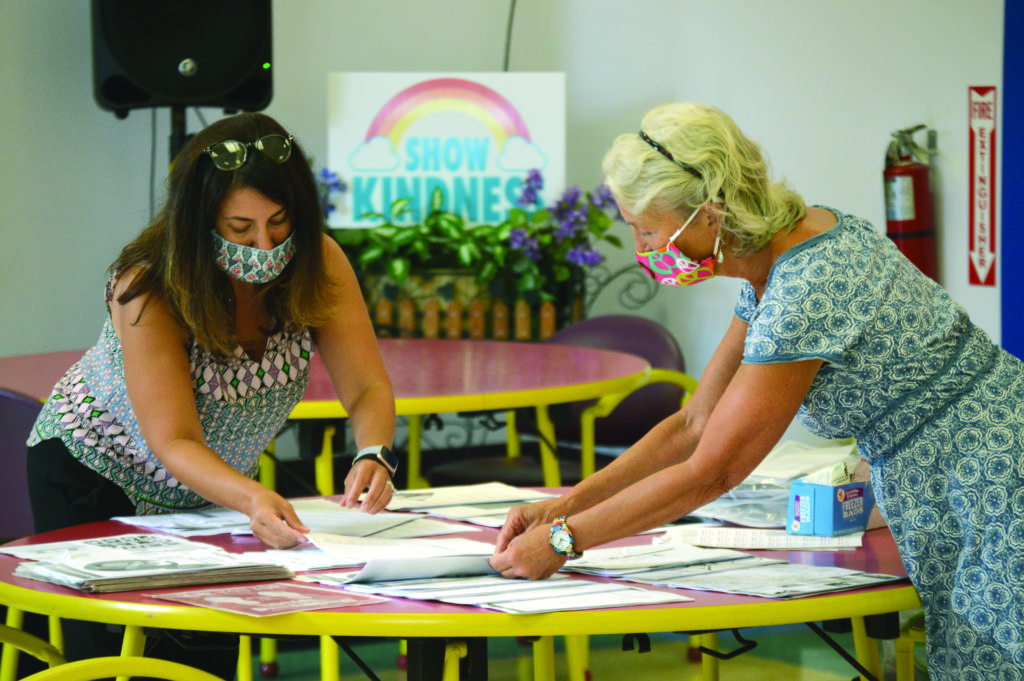 Kim Pimentel, a social worker, and Karen Maciulewicz, the executive director of Project Independence, assemble activity packets for clients. The adult day health care center has stayed connected with clients throughout the pandemic.

In the initial days of the pandemic, staffers at Project Independence, much like the rest of the nation, assumed the chaos brought on by COVID-19 would subside within a few weeks.

“I told everyone that we were going to be closed for two weeks. I thought it was going to be like a little vacation. Little did I know the extent of the vacation,” said Karen Maciulewicz, executive director of Project Independence.

“At the beginning, you think it’s only going to be a couple weeks. Then a few more weeks. And some of the caregivers are struggling without additional help,” said Maciulewicz.

Founded in 1982, the agency serves older adults and adults with disabilities in an effort to promote independent living and to prevent premature institutionalization. Its location on Elm Street provides a welcoming space for its participants to socialize. And, due to the nature of the work, adult day health care centers were shuttered early on in the pandemic to prevent the centers from becoming a hotbed of COVID.

Two weeks after closing its doors to its participants, Project Independence staffers returned to the office in an effort to provide assistance to their clients where possible. Staffers checked in over the phone and helped coordinate services. But, this process was not without its own set of challenges.

“A lot of nursing and social work is visual and observational,” said Lori Lincoln-Viera, an LPN and the assistant program director at Project Independence. “Because we know our folks so well, we would see a decline in a given area.”

Lincoln-Viera explained that because clients with dementia and cognitive issues are largely unable to communicate over the phone, the agency relies heavily on their clients’ caregivers or family members for information. Some of those who are able to speak on the phone have hearing issues. And because of these barriers, it can be difficult to communicate directly with clients about safety precautions during the pandemic, like social distancing and wearing a mask. The COVID crisis has also placed more work on the shoulders of the caregivers.

“It’s more daunting,” said Lincoln-Viera. “And [caregivers] are not able to get the respite they need. Most of our clients cannot be left alone.”

Prior to COVID, Acushnet resident Brenda Gomes would bring her mother, Izzy, to Project Independence a few times a week. Gomes and her husband care for and live with her mother, who has dementia, and her mother-in-law.

“I would drive [Izzy] down in the morning, drop her off and then I would walk at the YMCA,” said Gomes. “Do I miss it? Immensely.”

Gomes said she’s been looking forward to Project Independence reopening – not only because it will enable her to get back into her walking routine, but because her mom needs social interaction.

“My mom enjoys being around others,” she said.

Deborah Lopes, who lives in senior housing in New Bedford, said she’s been taking part in Project Independence’s services for the past six years. She was initially referred to the program because she was having a hard time socializing with others due to her ongoing struggle with anxiety and depression. The pandemic has only compounded those issues.

Still, Lopes said she’s thankful that Project Independence stayed connected with its clients, whether through phone calls or by delivering activity packets and newsletters to consumers in-person.

“They’re going above and beyond. They’re still there on the frontlines,” said Lopes. “Those are my heroes.”

“I’ve been having some community visits with some of our folks – always socially distanced with masks out in their yards or front porches,” said Kim Pimentel, a social worker with Project Independence. “We’ve been trying to have some quick visits with a familiar face, even if it’s from behind a mask.”

This summer, the agency has been working toward its reopening, which is officially happening on Aug. 3. The center was recently upgraded with a new air filtration system, and staffers have received education about what they might expect regarding their clients’ social and emotional needs when they return.

“We’ve heard from caregivers that there has been a progression of diseases – a loss of muscle tone or increased confusion for some folks with dementia,” said Pimentel. “As we reopen, we’re thinking about treating every interaction as an opportunity for assessment.”

The physical space will also look different, with less tables and chairs as well as restrictions on the amount of clients they can accept at one time. Despite all the obstacles the pandemic has placed on the agency, Project Independence staffers feel this disruption has been an opportunity to pause, reflect and renew.

“It has forced us to slow down and look inside and figure out what’s important,” said Maciulewicz. “We’re regaining our energy. We’re looking forward to a new day.”