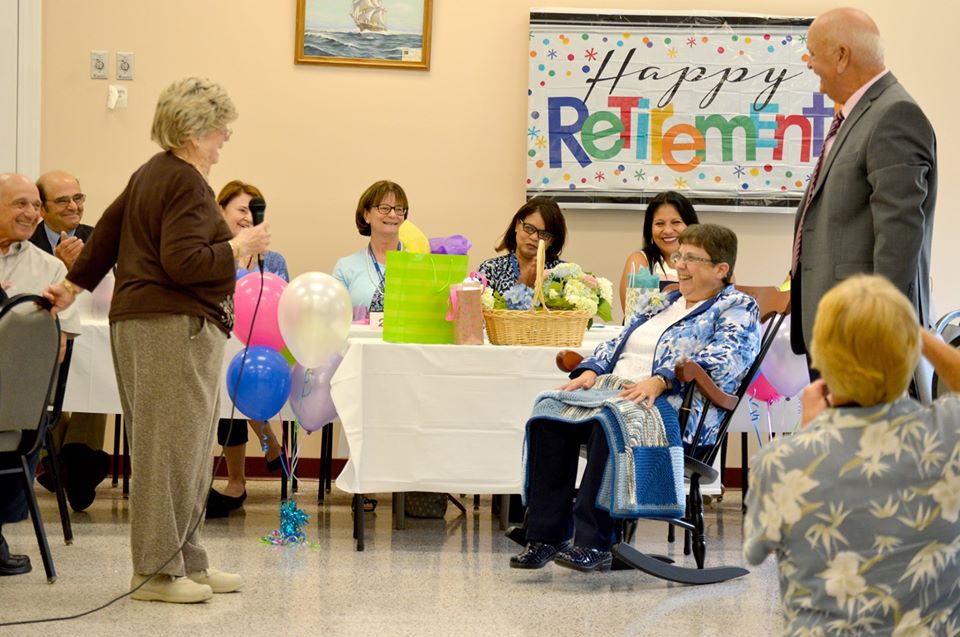 This article originally appeared in the August 2019 edition of Senior Scope. Article and photos by Seth Thomas.

The patrons who frequent the Ye Olde Breakfast Shoppe, the volunteer-operated restaurant housed at the Rochester Council on Aging, love that on most mornings Sharon Lally, the director of the senior center, will work her way around the room, catching up with the visitors at each table.

“No matter what, I’ve always seen a smile on her face. I love that about her,” said Doreen Grover.

Lally will be retiring at the end of August, following 13 years as the director of the Rochester Council on Aging. She will be replaced by Cheryl Randall, the former director of the The Association for the Relief of Aged Women of New Bedford. Lally has served as a director of five councils on aging throughout Massachusetts over the past 25 years.

While known locally for her work with senior citizens, Lally started her career working with high school seniors. Right out of college, she worked as a home economics teacher in northern Massachusetts. She soon found out, however, that the life of a high school teacher was not for her.

For years, Lally worked in nursing homes as an activity director and eventually taught certification classes on the subject throughout the state. After working toward a master’s degree in gerontology, she landed her first council on aging job in Andover.

“I was green as green could be,” said Lally. “They were looking for programs, and I believe I was hired because that was my strength.”

Throughout her career, Lally has also served as a director for councils on aging in Fall River, Duxbury and Needham. When she arrived at Rochester, she said the building was relatively empty and finding new participants became her top priority.

About two years later, she collaborated with the Rochester Lions Club to launch a breakfast program that became a major success. This November the program will be in its 11th year.

“We had another restaurant in town, but it was very small and you couldn’t sit and talk,” said Cecelia Hall, a frequent council on aging volunteer. She said the Ye Olde Breakfast Shoppe became the new game in town.
“And the price is right,” her husband, Rick Hall, added.

“It’s a family affair. You keep coming, and you meet the same people and you discuss things,” said Henry Stopka, a breakfast patron of many years. “You can come here and express yourself.”

Lally said the breakfast program was like a building block for the center. The restaurant is for people of every age and is not limited to Rochester residents, and Lally makes an effort to meet the patrons and spark their interest in everything else the center offers. “We’re going to miss her here,” said Betty DeVincent, who was sitting at a table packed with her friends. “She’s a fixture here, and she’s done a wonderful job.”

While Lally said the breakfast program is likely the most successful program she started during her time in Rochester, she’s also proud of completing the lengthy national accreditation process for the center.

“Sharon has a vibrant community of volunteers,” said Ann Soares, a Rochester Council on Aging staffer. “She creates opportunities for volunteerism, and she’s always doing outreach.”

Lally is happy that, these days, the center is considered a focal point in town.

“The people that I have around me are wonderful,” said Lally. “I’ve been so fortunate to have dedicated staff and volunteers who step up to the plate and make this place what it is. You can’t do it alone.”

“It’s been wonderful. I’m going to miss a lot of people, but I do intend to return as a volunteer or a participant,” she said.