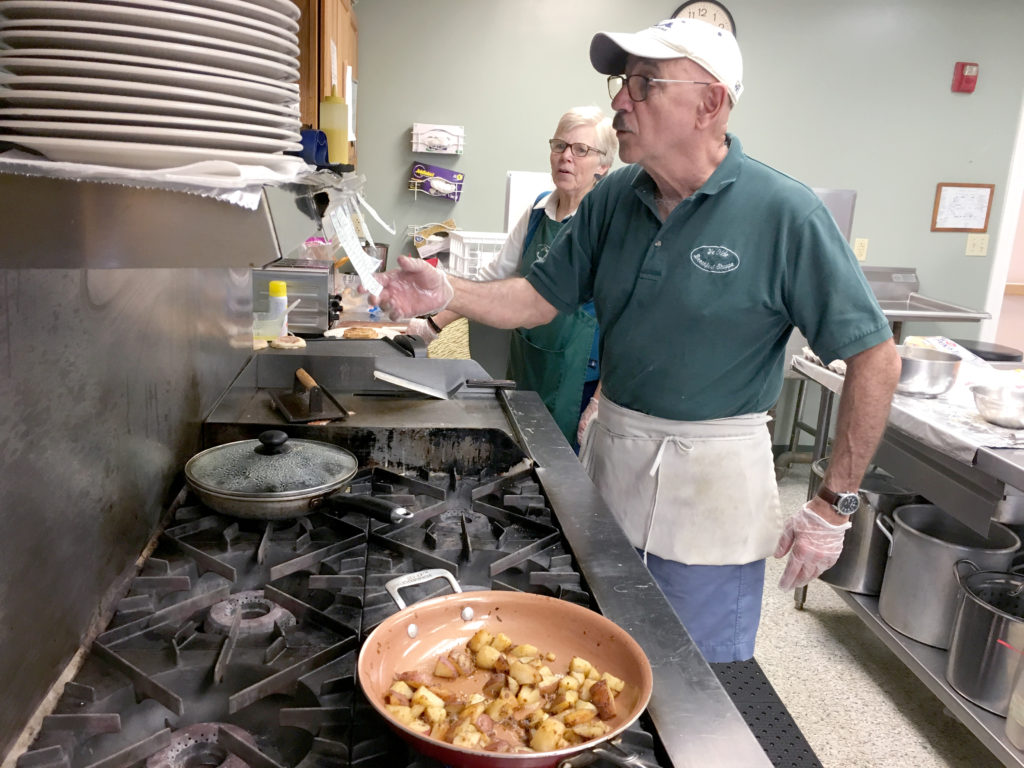 Connie Pierce and Dennis Pucello prepare meals at the Rochester COA during its week-long celebration of the Ye Olde Breakfast Shoppe’s tenth anniversary.

This article originally appeared in the December 2018 edition of Senior Scope. Article and photo by Seth Thomas.

On a Thursday morning at the Rochester Council on Aging, the parking lot has nearly reached capacity as customers wait inside for a hot meal and a cup of coffee.

The senior center’s volunteer-operated breakfast program, the Ye Olde Breakfast Shoppe, celebrated its tenth anniversary during the week of Nov. 5, featuring selections from the program’s original menu — and original prices.

Dennis Pucello, a former HR director who has volunteered at the breakfast program for the past decade, was working his way through orders in the kitchen with Connie Pierce, who has been volunteering since she retired a few years ago. The two were busy double-checking order slips, mixing eggs, grilling bacon, toasting English muffins and dishing out home fries.

“It’s the best meal in town for the price you pay,” said Pucello. “The people appreciate it. I like to think people come in because we treat them well.”

The program began after two other go-to breakfast spots in town — a bakery and a pizza shop that sold coffee and muffins in the morning — closed down. Rochester COA Director Sharon Lally thought the senior center could fill the void, and, through a partnership between the Friends of the Rochester Senior Center and the Rochester Lions Club, breakfast was served.

Proceeds from the inexpensive menu options go to both the Rochester senior center and the Lions Club.

Lorraine Thompson, who is a member of the Lions Club, said the program has grown over the years.

“When we started, it was bacon and sausage. Now we have bacon, sausage, ham, linguiça, Spam and hash. We added breakfast sandwiches. We started with a cheese omelet; now you can get most anything in an omelet,” Thompson said.

Their clientele has also expanded. Thompson said, when the program began, the center could anticipate an average of 15 customers. Now, depending on the day, they can draw a crowd well over 40.

“Without a doubt, it’s the most successful endeavor we’ve ever undertaken at the Rochester COA,” said Lally.

She said the program has had great support from customers and volunteers and has been a way to keep the senior center a community focal point. At times, though, the program has struggled to maintain volunteers.

When asked if volunteers need prior kitchen experience to work at the Breakfast Shoppe, Pucello and Pierce chuckled.

“Volunteers need to have an interest. This is short-order cooking. It’s not a culinary institute; it’s easy,” said Pucello. “If people could come in one day a week and help out, either in the dining room or in the kitchen, that would be great.”

Volunteers, much like the customers, have also ranged in age over the years. Thompson said a teenager volunteered at the center over the summer, for instance.

The Ye Olde Breakfast Shoppe is open Monday through Friday from 7 to 9 a.m. at the Rochester COA, which is located at 67 Dexter Lane in Rochester. To learn more about the program or volunteer opportunities, call the Rochester COA at 508-763-8723 or email Lorraine Thompson at lthompson@townofrochester.com.