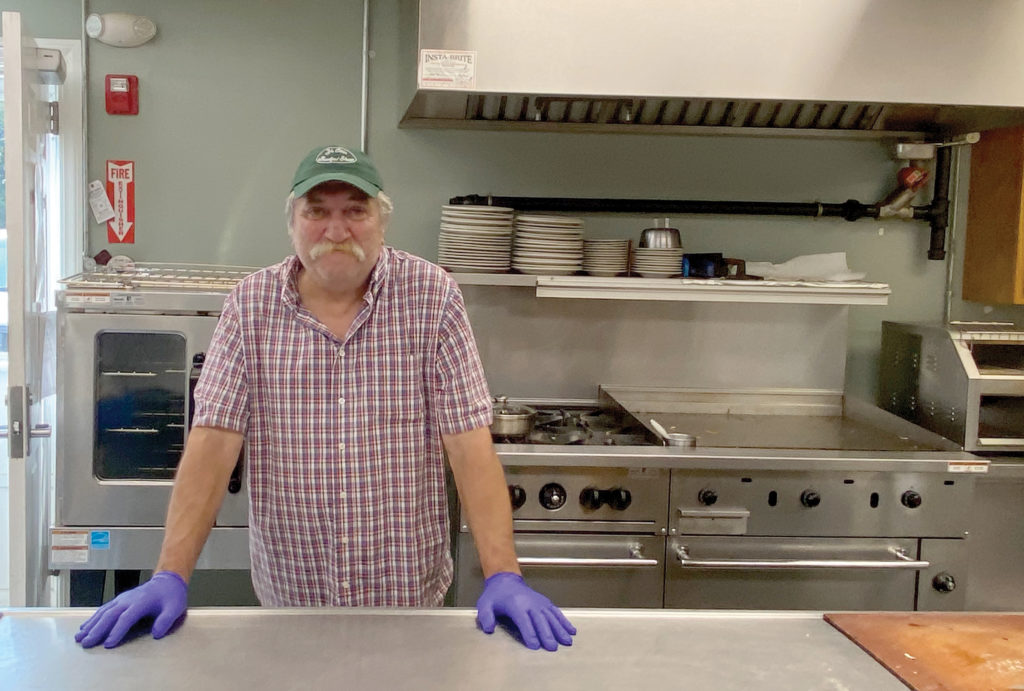 In 2019, Kenneth Viera became the head chef at the Rochester Council on Aging’s breakfast program by way of Coastline’s Senior Community Service Employment Program (SCSEP). The restaurant is open for breakfast Monday through Friday from 7 to 9 a.m. and is open to anyone of any age from any town. [Photo courtesy: Eric Poulin]

Last year, when the pandemic brought with it a wave of chaos and uncertainty, businesses around the nation were forced to modify how they operated, if not close altogether. For Eleanor Correia, who greatly values her job fielding calls at Justice Bridge Legal Center, a nonprofit that helps individuals find affordable legal services, this period of uncertainty impacted her personally.

“It’s not just a job for me; it’s my social outlet, too,” Correia said. “Getting to speak with other adults keeps my mind working.”

Correia, along with several dozen others employed through Coastline’s Senior Community Service Employment Program (SCSEP), was temporarily unemployed early on in the pandemic. SCSEP is a community service and work-based job training program for older Americans who meet eligibility guidelines. In a normal year, participants of the program could expect to work an average of 20 hours a week at one of Coastline’s partnering agencies.

As businesses adjusted to the uncertainty that defined the early days of the pandemic, there were few opportunities for SCSEP participants to work. While those enrolled in the program were granted emergency paid sick leave in response to COVID-19, Karyl Ryan, the director of Coastline’s employment program, said that her participants weren’t satisfied with waiting on the sidelines.

“Back in March 2020, when the country shut down, Coastline hired five of the SCSEP participants,” Ryan said. “They could have stayed at home collecting emergency paid sick leave. But they chose to go to work when there were no vaccines or assurances that they weren’t going to get sick. If that doesn’t show the commitment of this age population, then nothing does. They want to work.”

After a few months away from her job at Justice Bridge, Correia was able to return in the summer of 2020, albeit remotely.

“It was making me crazy – sitting there, just watching TV,” said Correia. “I’m old school – it’s not yours unless you’ve earned it. It was unsettling for me and depressing.”

“I would cry every day because I wanted to work so bad,” she said. “When they gave me the okay to work, I haven’t cried since.”

In addition to helping participants build their résumés or further their skill sets, the program can give them a sense of purpose, as well.

Kenneth Viera was between jobs and struggling financially when he first joined SCSEP. He was a furniture finisher by trade, which he did for 35 years. Several years ago, his son, who worked alongside him at his business, died unexpectedly in a motorcycle accident, upending his business.

After decades working for himself, he was suddenly seeking employment in his late 50s – and he was doing so without the references or connections he may have acquired had he worked for a larger company.

What he did have was a strong work ethic. Sharon Lally, the former director of the Rochester Council on Aging, asked him if he had any experience cooking. While he didn’t have formal experience in a commercial kitchen, he accepted the offer she had for him: serving as the chef for the center’s popular breakfast program.

For years, the Rochester COA has operated a restaurant, serving breakfast at affordable prices. Primarily, the restaurant is made possible by volunteers, which can pose challenges when it comes to scheduling. Viera, who is paid through SCSEP, is a more regular presence.

While Viera, like the other program participants, was out of work last year while the Rochester COA adjusted to the pandemic, he has since returned – and so have the customers. Viera’s day begins at 5:30 a.m. He’ll begin by making home fries and baking muffins in the early hours as he prepares for customers to arrive at 7 a.m.

“It’s a full-blown kitchen in there,” said Viera. “And it’s a dream come true for me. It’s like having my own restaurant without having any of the overhead.”

As Ryan looks toward the future, she’s planning to bring more people into the program. However, she said some of the host agencies are not ready to bring on more employees. And, with the highly contagious Delta variant of the coronavirus looming overhead, the future remains uncertain.

“We’re still trying to keep them positive and connected,” said Ryan. “And we’re still there to help them with their personal employment goals. It’s important that we keep them moving forward.”