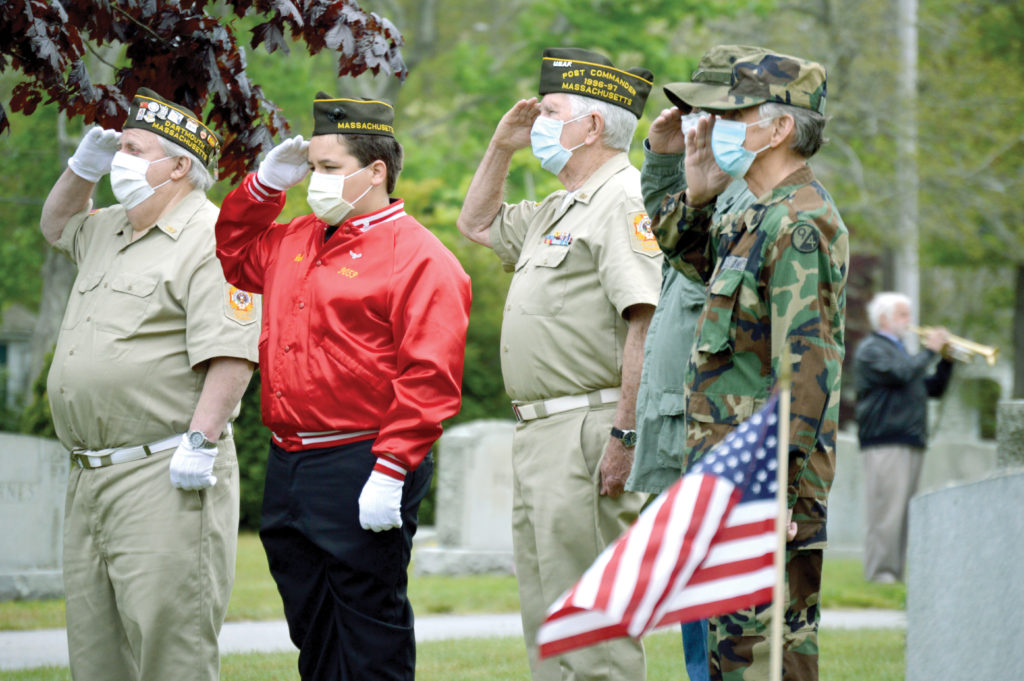 After weeks of isolating indoors, the public cautiously emerged from quarantine by the end of May. The Town of Dartmouth canceled its annual Memorial Day parade in favor of a brief, lightly attended ceremony at the Elm Street Cemetery. A man plays “Taps” in the distance as masked participants salute the flag.

This article originally appeared in the June 2020 edition of Senior Scope. Article and photos by Seth Thomas.

In the early days of 2020, reports warned of a mysterious new illness spreading in central China. Three months later, Mayor Jon Mitchell declared a state of emergency in the City of New Bedford.

“The virus is coming, if it’s not already here,” he said during a press conference on March 13.

In the days that followed, store shelves were stripped bare as grocers competing with the public’s demand for paper products, cleaning supplies and food. Governors across the nation ordered the public to self-isolate, prompting businesses to shutter, schools to migrate online, and citizens to remain home save for necessary trips to the grocery store or pharmacy. 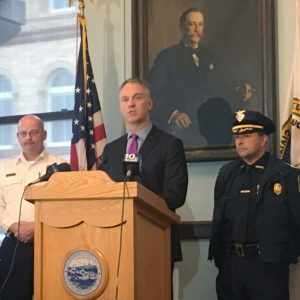 The virus is called SARS-CoV-2. The disease it causes is called COVID-19. Its composition is similar to that of the severe acute respiratory syndrome (SARS) virus, but this new coronavirus has spread faster and sickened more people than SARS. By the end of May, there had been more than 5.7 million cases worldwide and at least 350,000 deaths.

Word of the new virus first surfaced on Dec. 31, 2019, when Chinese health officials reported dozens of patients experiencing respiratory illness to the World Health Organization (WHO). A majority of the cases were tied to a single seafood market in the city of Wuhan, the capital of China’s Hubei Province.

In the weeks that followed, the virus had spread outside of China, with cases confirmed in Japan, South Korea and Thailand. The first case in America, a man from Washington State who had traveled to Wuhan, was reported on Jan. 21. Two days later, Wuhan restricted travel ahead of the busy Chinese New Year holiday season.

By the end of January, with about 7,700 confirmed cases worldwide, WHO declared a global health emergency in an effort to sound the alarm that the virus may spread to countries with weak health care systems. Just 25 days later, there were approximately 80,000 confirmed cases and 2,600 deaths globally, and the CDC warned that America should prepare for the inevitable spread of COVID-19.

WHO officially declared COVID-19 a pandemic on March 11, and President Donald Trump declared a national emergency two days later, freeing up federal funds for states. The first COVID-related death in Massachusetts occurred on March 19, as confirmed cases across the globe exceeded 200,000.

The virus transfers primarily between people in close contact through airborne, respiratory droplets produced from sneezes, coughing or talking. The majority of patients will display mild symptoms, which can include fever, cough and shortness of breath. Some people may never develop symptoms. Most of those infected will recover on their own.

However, COVID-19 can cause serious illness and may cause difficulty breathing. Older adults and those with underlying health issues, such as diabetes, lung disease and heart problems, are more likely to develop serious illness.

Due to the pace at which the virus spreads, COVID-19 has proven itself capable of overwhelming health care systems. On Feb. 20, there were three confirmed cases in Italy. By March 22, that number ballooned to about 59,000 cases. From mid-March through May, hundreds of Italians died daily.

“If Italy’s experience shows anything,” The New York Times wrote on March 21, “it is that measures to isolate affected areas and limit the movement of the broader population need to be taken early, put in place with clarity, then strictly enforced.” 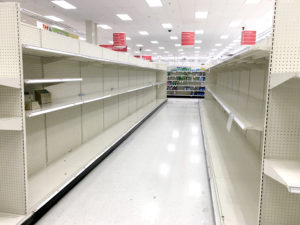 Store shelves lay bare on March 14, just one day after President Donald Trump declared the pandemic a national emergency. Stores would compete with consumers for weeks as COVID-19 spurred panic-buying of paper products, food, pet supplies and other essentials.

As researchers raced to develop a vaccine and find an effective treatment for the infected, governments across the globe went to great lengths to “flatten the curve,” or slow the spread of the virus to ensure that hospitals could handle the surge of patients seeking medical treatment at one time.

To achieve this goal, the public was tasked with taking collective action, namely by practicing better hygiene, like frequent hand washing, and avoiding close physical contact by standing 6 feet apart from one another in public, and spending the bulk of any given day isolating indoors.

As the virus spread across America, the CDC recommended wearing face coverings in places where social distancing would otherwise prove difficult, especially inside stores.

The businesses that remained open were adapting, too, by limiting the number of shoppers at any given time, erecting plastic barriers between employees and the public, and enforcing social distancing by marking floors with tape to maintain 6-foot gaps between customers.

Controlling the outbreak also meant pausing the economy for months. In America, unemployment rates skyrocketed as states implemented restrictions on which businesses could remain open.

From mid-March to the end of May, about 40.7 million people filed for unemployment – or about one out of every four American workers. A recent survey from the Federal Reserve System revealed that 39 percent of American households earning less than $40,000 a year reported a job loss in March.

“The scope and speed of this downturn are without modern precedent, significantly worse than any recession since World War II,” said Federal Reserve Chairman Jerome Powell during a recent online event hosted by the Peterson Institute for International Economics. “We are seeing a severe decline in economic activity…and already the job gains of the past decade have been erased.”

Emerging from the quarantine has proved to be a complicated matter, especially because the virus can linger. On April 8, Wuhan lifted its 76-day lockdown. By early May, six new cases were detected, prompting the Chinese government to respond with mass testing for the city’s 11 million residents. 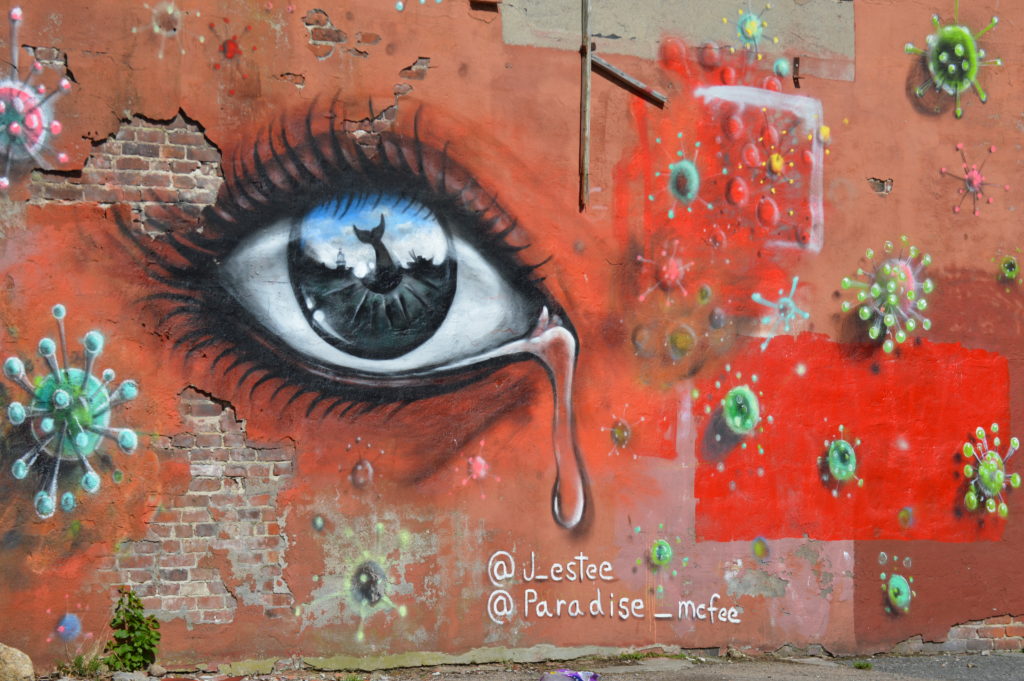 A mural in downtown New Bedford depicts a crying eye reflecting the City and a diving whale. The eye is surrounded by coronavirus cells.

On March 10, as COVID-19 spread throughout the nation, Governor Charlie Baker declared a state of emergency in the Commonwealth. About two weeks later, Baker took that a step further by ordering non-essential businesses to close and issuing a stay-at-home advisory for Massachusetts residents. Groups of 10 or more were prohibited, prompting countless events to be canceled throughout the year.

That policy remained in place through May 18, when Baker announced a strategy to reopen the state through a four-part “phased” reopening. Each phase of the plan loosens restrictions, allowing for more businesses to reopen. However, the plan warns that if conditions worsen in the weeks ahead, “the entire Commonwealth may need to return to an earlier phase.”

Each phase of the plan is expected to last a minimum of three weeks, with the potential of lasting longer. More businesses and activities will gradually reopen, so long as the state has made progress on certain public health criteria, including increasing its testing and contact tracing capabilities. By taking a phased approach, officials hope to prevent a “second wave” of the virus from overwhelming the health care system.

While the reality of masks and social distancing will remain a part of everyday life for quite some time, the guidelines intend to return society to “a new normal.” 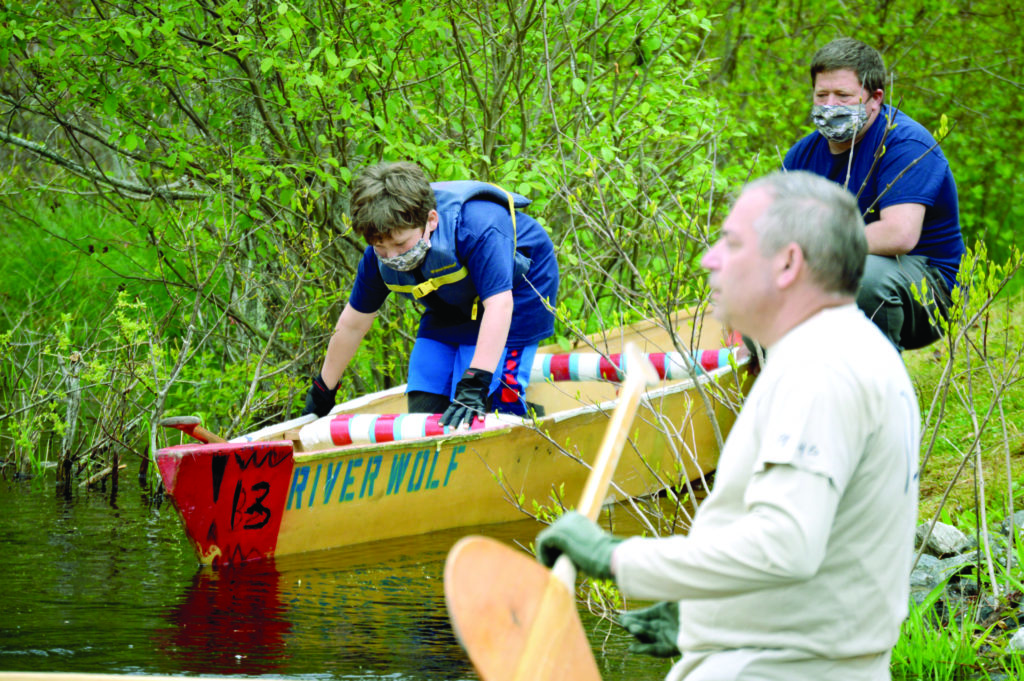 The Rochester Memorial Day Boat Race, held May 25, drew a small crowd of masked spectators and participants. Henri Roy and his dad, Jonathan, prepare to launch their boat while wearing matching masks.

Throughout every step of the plan, Massachusetts residents are urged to continue to wash their hands frequently, practice social distancing, and wear a mask where social distancing is not possible. Residents should monitor how they feel on a daily basis and remain at home if they are feeling ill.

The first phase of the plan allows for manufacturing and construction businesses to return. On May 25, office spaces, salons, pet grooming companies and car washes were allowed to reopen, albeit with restrictions.

It should be noted that the policy reinforces that staying at home is still the safest option. All residents are advised to leave home only for health care, worship, and permitted work, shopping, and outdoor activities. People over the age of 65 and people who have underlying health conditions are advised to remain at home except for trips to the grocery store or for health care needs.

Some states that had loosened restrictions earlier in the year are now modifying their statewide approach to a county-by-county basis. Texas, which began loosening its restrictions on May 1, saw a large spike in cases after it concentrated testing on meat processing plant workers. On May 18, Texas Governor Greg Abbott announced that five counties in the state, which were largely centered around those meat plants, would delay entering the second phase of reopening.