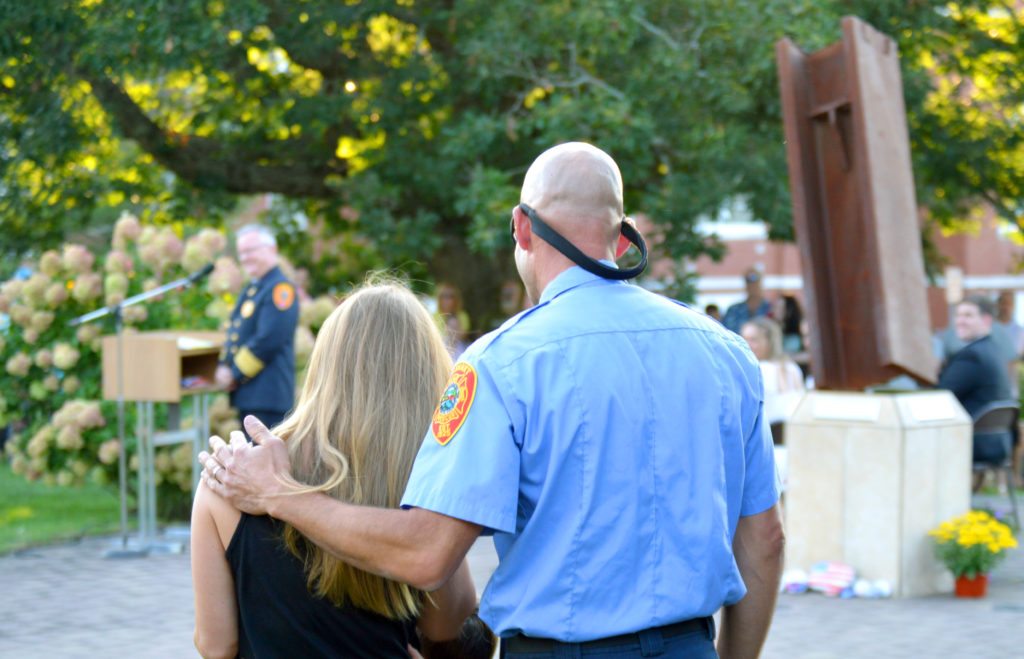 The 20th anniversary of the deadliest terrorist attack in history was marked by solemn ceremonies around the South Coast. Senior Full-time Firefighter Eric Arruda (right) of Acushnet Fire & EMS was part of the town’s ceremony. The event coincided with the 10th anniversary of the installation of a 9/11 memorial outside the Acushnet fire department headquarters.

If there is one common experience that united every American old enough to remember, it was the terrorist attacks on September 11th. Two decades later, as communities throughout the South Coast gathered to honor those lost that day, people still recall exactly where they were the moment they heard about the deadliest terrorist attack in history, which left nearly 3,000 dead and resulted in more than 25,000 injuries.

“We remember how we felt. The rage, the sadness,” said New Bedford Mayor Jon Mitchell to a crowd gathered outside the steps of City Hall. “But we also remember what it felt like in the aftermath, when everyone wanted to do something to help.”

“Like many of you, the details of the day are etched into my memory,” said New Bedford Police Chief Paul Oliveira, recounting the 72 police officers who died during the response effort. “But just as I remember the horrors of September 11th, I remember a day that was just as important to acknowledge: September 12th. I remember the entire nation coming together – first to mourn, then to unite.”

“As Americans, we felt closer to one another, we greeted each other more, we began to look out for one another. We were all connected by the pain of shared trauma and galvanized by the resolve to make our country stronger,” Chief Oliveira said. “The unity we displayed – I remember it all.”

While most South Coast communities held a formal remembrance ceremony, some honored the dead in their own way. Earlier that morning, about two dozen firefighters gathered at the bleachers outside Old Rochester Regional High School. The group, which was comprised of firefighters from the tri-town region, climbed the stairs 110 times – the number of stories of the World Trade Center. Each participant was in full gear and carried with them the names of the 343 fallen firefighters.

For Roy Oliveira, the day brought back personal memories. Oliveira was working in Washington, D.C. on September 11th at the Defense Intelligence Agency (DIA). Oliveira, who served as Dartmouth’s Veterans’ Service Officer from 2010 to 2018, was in a training course that morning when news poured in about the World Trade Center. Not long thereafter, a third plane struck the western side of the Pentagon, killing 125 people in the building and all 64 passengers on board.

“I was making my way outside when I heard the roar of the airplane coming down,” said Oliveira. “I didn’t see it, but I heard it hit the Pentagon. Then all I could see was a plume of black smoke.”

Oliveira’s colleague, Rosa Maria Chapa, whose federal career spanned 31 years, was among the causalities – a fact he didn’t learn until weeks later when the names of the victims were released. While they never met in person, the two had enough correspondences over the phone and email to form a bond.

“She had plans to retire at the end of that year. She wanted to spend more time with her grandkids,” said Oliveira. “On 9/11, that always hits me.” 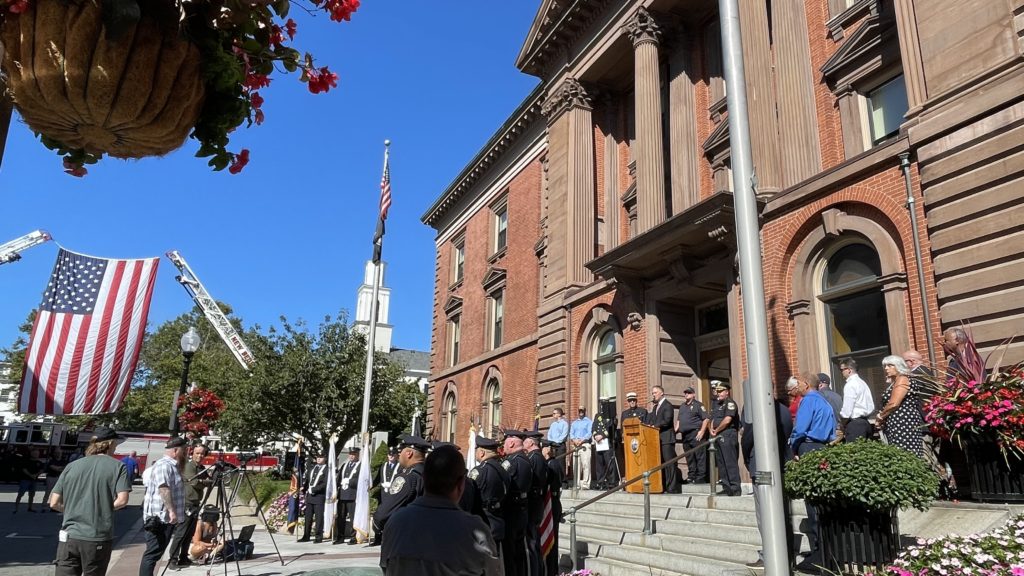 A large American flag billows in the wind outside of New Bedford City Hall on the 20th anniversary of the September 11th attacks.

Some announcements were also made at the local remembrance ceremonies. Mayor Mitchell announced that he asked Christopher Gomes, the director of Veterans’ Services, and the City’s Veteran’s Advisory Board to establish a “fitting and appropriate monument for the residents of Greater New Bedford who served in the nation’s armed forces in the post-9/11 conflicts.”

“As the City and region that has stepped forward when the nation has called throughout its history, a tribute to this generation’s sacrifice is in keeping with our core values,” said Mitchell.”

In Acushnet, where 10 years ago a 9/11 memorial was installed outside the fire station on Russell Street, Fire Chief Kevin Gallagher announced the hire of a new call firefighter. During the evening ceremony, Gallagher called upon Benjamin Sonnenburg, who was months old on Sept. 11, 2001. Members of the audience applauded as Sonnenburg signed his employment papers.

Immediately after, Acushnet firefighters rang a bell to honor those who died two decades ago.