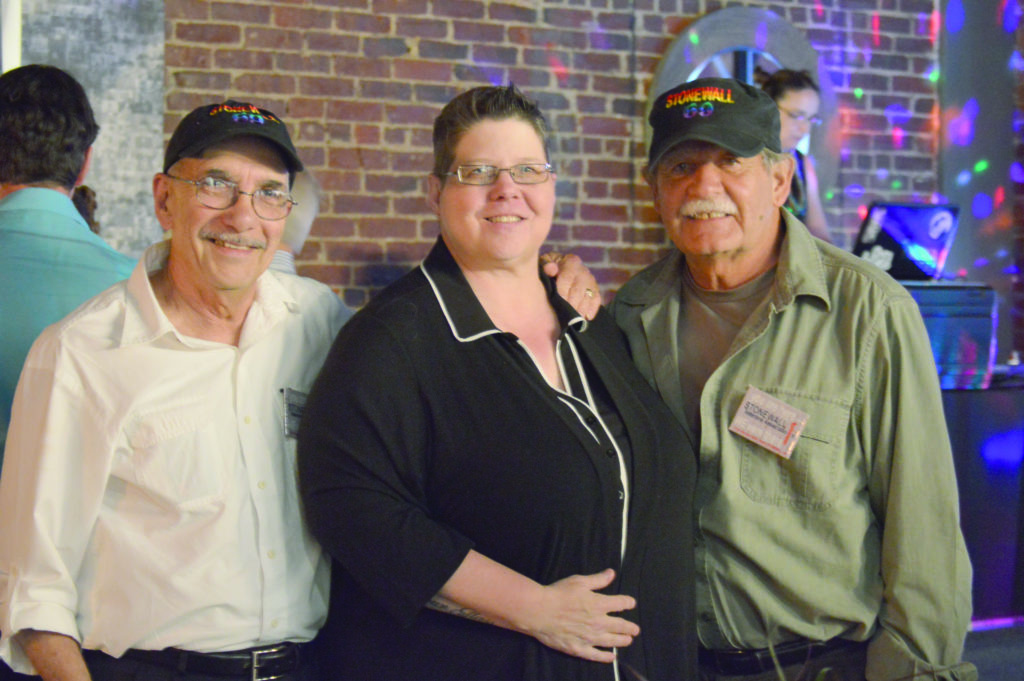 David Bermudez (right), a veteran of the Stonewall Riots, presented at the New Bedford Harbor Hotel on May 31. Bermudez and his husband, Bob Isadore (left) spoke with the host of The LGBTQ Voice, Traci Welch (center). The event was one of many hosted by the South Coast LGBTQ Network during Pride Month.

This article originally appeared in the July 2019 edition of Senior Scope. Article and photos by Seth Thomas.

June is Pride Month, and one veteran of the famed Stonewall Riots visited the South Coast to give a firsthand account of American history.

The 50th Anniversary of Stonewall Celebration, which was held on May 31 at the New Bedford Harbor Hotel, featured guest speaker David Bermudez, who was present at the Stonewall Inn, a gay bar in New York City, during the early hours of June 28, 1969.

When police spontaneously raided the bar that night, patrons fought back, kickstarting several days of protests. The rebellion is considered the beginning of the gay liberation movement of the ‘60s, ‘70s and ‘80s, and the start of what would go on to become the fight for LGBTQ rights in modern America.

The South Coast LGBTQ Network, a local nonprofit that maintains a comprehensive support network for LGBTQ individuals and families across the age spectrum, hosted the event. Traci Welch, host of the local talk show The LGBTQ Voice, moderated the discussion with Bermudez and his husband, Robert Isadore.

The event filled the room; some audience members even sat on the floor, eager to hear Bermudez’s memories from that night. Isadore set the scene, noting the inherent dangers of being a LGBTQ person half a century ago. “It was illegal to even serve gay people alcoholic beverages,” said Isadore. “If you were caught or arrested, the next day your name would be in the newspaper.”

Homophobia was rampant following World War II as part of the Second Red Scare or McCarthyism. It was believed that gays and lesbians were communist sympathizers and posed a security risk because they were susceptible to blackmail. As a result, thousands were fired from their jobs within the United States government. In the ‘50s, the American Psychiatric Association listed homosexuality as a mental disorder in the Diagnostic and Statistical Manual of Mental Disorders, where it remained until 1974.

It was in this environment where the Stonewall Riots began.

Bermudez said the Stonewall Inn, which is located in Greenwich Village in Manhattan, was owned by the mafia in those days. This worked in favor of the patrons.

“No one would bother us because the mafia paid the police,” he said.
However, the cops did make an appearance that night. While
Bermudez said he’s uncertain exactly who started the riots, he said that as soon as the patrons poured out into the streets, the action began. Hostility mounted as patrons were led outside to be loaded into patrol wagons. The commotion attracted more people, and soon the crowd clashed with police.

“I like to say that the rebellion was inside the bar. When the doors opened – that was a riot,” said Bermudez.

By 4 a.m., the streets had emptied, but the protests around the bar resumed the next night. Bermudez said he wasn’t present for the second night.

“I talk about Stonewall wherever I can because we have to stick together and help each other – no matter who we are,” he said. 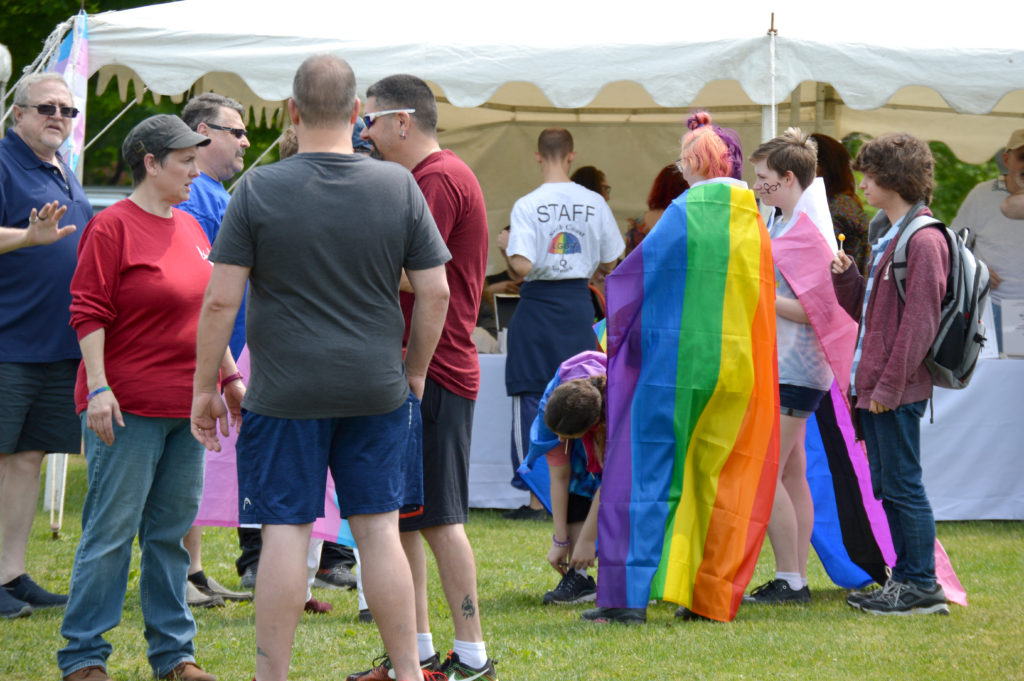 South Coast Pride was held in June at Buttonwood Park.

Members of the local Marriage Equality Coalition, who fought for marriage equality in Massachusetts 15 years ago, were also present at the event. Rep. Antonio Cabral’s wife, Jessica Cabral (Rep. Cabral could not make it that night), and his daughter, Victoria, presented resolutions on behalf of the House of Representatives to Andy Pollock, Liz DiCarlo, and Bev Bacceli for their “tireless commitment and dedication to marriage equality in Massachusetts” and for “paving the way for equal rights for all same-sex couples across the nation.”

Pollock, who served as the co-chair of the coalition, recalled how, at the time, some of the public sentiment surrounding the same-sex marriage debate was vitriolic. He said that changed following the 2006 attack at the gay bar Puzzles, in which Jacob D. Robida, then age 18, attacked and injured three patrons.

“I think people realized that rhetoric has some consequences,” Pollock said.
The South Coast LGBTQ Network hosted or co-hosted several events during Pride Month, including the Stonewall event, South Coast Pride in Buttonwood Park on June 1 and AHA! Pride on June 13. Additionally, the Network had worked with the Fall River Pride committee to launch Fall River Pride on June 2.

​Rebecca McCullough, President of the Network, was delighted by the strong turnout. Hundreds of people attended each event.

“What really made it amazing was all the collaboration we’ve built over the past few years. Everybody worked together, and we’re able to do more things,” she said. “The mayor, the businesses, the city council, the AHA! team, the allies, LGBTQ people…everybody made it a great Pride Month.”

She also expressed her thanks to the Community Foundation of Southeastern Massachusetts – John Lipsky-George Whittaker Fund, which helped launch the Network and has supported their events over the years.
McCullough said during AHA! Night, the network handed out pride flags to businesses that wanted to display them.

“Seeing over 30 businesses fly a pride flag during AHA! night – and seeing a rainbow flag over City Hall – was something that meant a lot to people,” she said. “Of everything that we did, the flag flying at City Hall meant more than anything else.”

“We’ve come a long way, and we still have a long way to go,” said DiCarlo during the Stonewall event at the Harbor Hotel. “The [South Coast LGBTQ] Network is the group to work with, to volunteer with. It’s not just about services; it’s about political action. We’re living in a time when all of our lives are at risk. We need to strengthen our resolve to ensure that people who are coming after us are going to be able to live out, open and safe.”

To learn more about LGBTQ issues, resources and events, or to volunteer or get involved, visit the South Coast LGBTQ Network at www.sclgbtqnetwork.org.