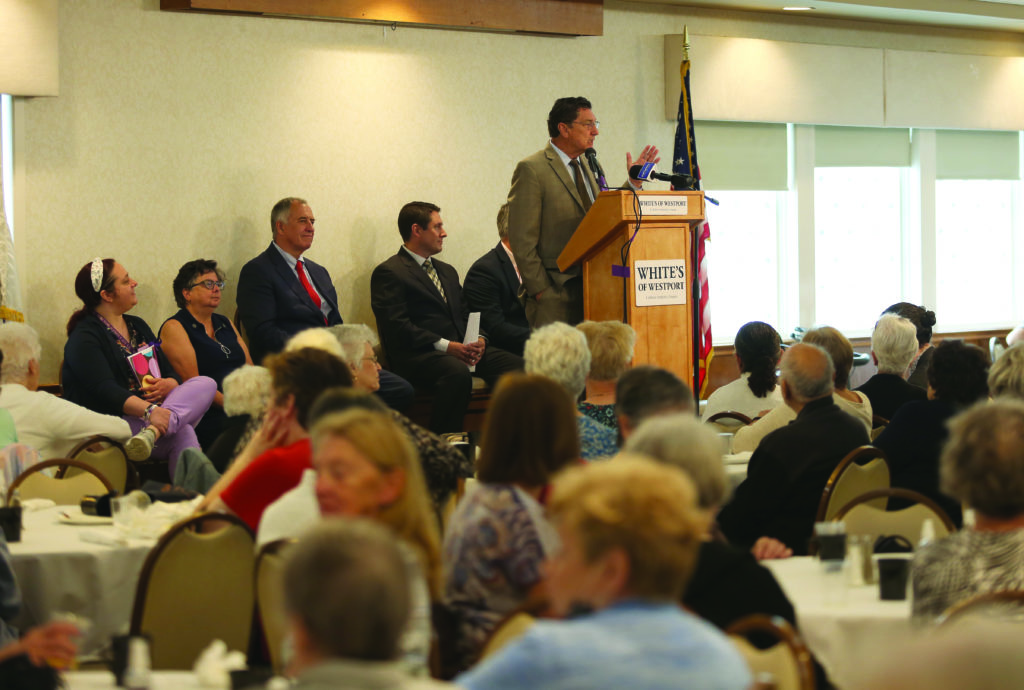 White’s of Westport was the place to be June 17 as Celebration of Seniors, the resource event for older adults, returned to the site after a two-year hiatus during the pandemic. About 600 seniors crowded the venue to connect with organizations and hear from speakers about topics that ranged from scams and elder abuse to healthcare, estate planning, Alzheimer’s support, and assisted living options.

Put on through a partnership between the Bristol County District Attorney’s Office, Rochester Council on Aging, and Coastline Elderly Services, the event featured more than 70 vendors with resources tailored to older audiences and a sit-down breakfast with both state and regional speakers.

Asked why she attended, Priscilla Santos said she came to learn. Santos, a volunteer for the Foster Grandparents program at Coastline, was making her way along the vendor tables picking up informational brochures that interested her.

“This is like an in-service for us,” she said.

A highlight of the event was the sit-down breakfast, where District Attorney Tom Quinn led a line-up of six speakers, telling seniors they have the right to be safe in their homes and communities.

Nationally, an estimated five million people are victims of elder abuse or exploitation each year, he said, noting that one-third of these are cases of financial abuse.

“My hope is to reduce such crimes through investigation and prosecution on the one hand and prevention and education on the other,” he told seniors, adding, “I will aggressively prosecute those who prey on seniors, but a number of these crimes are often preventable when people are educated and informed.”

“Seniors have given so much to our communities over the years…you deserve to be protected,” he said.

Quinn especially emphasized financial abuse and fraud including the many scams that exist that target older adults.

“I’ll make it very simple. Don’t answer the phone if you don’t know who it is. Don’t do it,” he said. “I would rather have you avoid a scam than to give $5,000 of your money that you’ll never get back.”

Quinn’s comments were echoed by Taryn Lee-Turgeon, assistant director of protective services for the state Executive Office of Elder Affairs. EOEA, she said, contracts with 19 agencies to oversee and investigate cases of elder abuse in the state.

“If you believe you are the victim of abuse or neglect, we will come out and investigate,” she said. “You deserve all the safety and happiness in your home.” 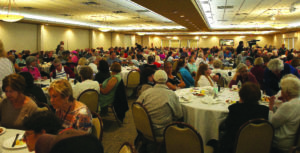 AARP state director Mike Festa gave those attending a rundown of some of the organization’s legislative priorities including the Fair Drug Prices Now campaign which advocates for the ability for Medicare to negotiate pricing with pharmaceutical producers. To general applause, Festa said, “The cost of prescriptions is out-of-control…We’ve got to stop the government from making it illegal to negotiate prices on prescriptions.”

Two other priorities he addressed is having three or four people in one room in nursing homes, which he called a contributor to “lapsed dignity,” and a tax relief measure for caregivers that would allow a credit of up to $1,500 for out-of-pocket expenses related to caring for someone.

Participants also heard from Mark Waggoner of Commonwealth Care, whose recent contract with Southcoast Health has made them a more active health insurance participant in the SouthCoast region, and elder attorney Michelle Beneski who told seniors that there are two key documents every older adult needs to have at the ready.

A healthcare proxy and durable power of attorney document “are the most important documents in my opinion,” Beneski said.

The many vendors on-site answered questions for seniors, offered information and gave out promotional gifts and materials. SSTAR was on site giving vaccines and booster shots to those who wanted them. Anyone who got their booster received a $25 Market Basket card for getting vaccinated.

Donna Frazier, mobile vaccine coordinator, for the Fall River-based organization, said the exposure for the vaccination process went very well and about 14 people were vaccinated.

“There was a lot of interest,” she said. “We answered a lot of questions for people so yes, it was definitely worth us being there.”

Coastline’s nutrition program had portion advice and a chance to taste healthy dishes like Registered Dietitian Stephanie Boulay helped attendees had a representation of a pound of body fat which was bigger and heavier than a paperweight. She said she uses it as a visual representation of what a person loses when they lose even a few pounds of weight.

It may not sound like a lot, but it is a big achievement, she said.