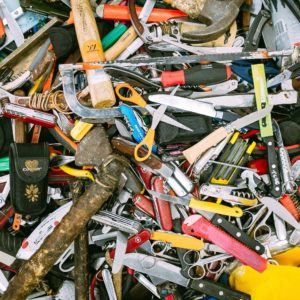 Have you looked around your home recently and thought to yourself, ‘How have I collected so much stuff?’

Is your basement or garage full? Have whole rooms been turned into storage spaces, or pathways narrowed so that you have to side-step to avoid hitting things?

If so, you’re not alone.

New years are all about doing things differently, and this year, as 2023 gets going, consider reducing the clutter that has built up over the years.

To get started, pause and take a slow look around your space, says Brittany Botelho, executive director of the adult day health care center, Project Independence in New Bedford. Note without judgment which spaces have become too cluttered, she advises.

“Check all the unused spaces for too much stuff, including the (former) children’s rooms, garages, and basements,” said Botelho. “As the nest has cleared out, we often make storage rooms when rooms lose their intended purpose. It’s very easy for those rooms to become unbearable and unmanageable for us.”

“Chances are,” she added, “if we’re squirreling the items away, we don’t actually need them.”

Botelho, who has a master’s in health care administration and is a former home care manager for Coastline Elderly Services, leads a support group for people who struggle with hoarding.

While not all clutter issues lead to hoarding, she said, it’s an important issue to address.

“People start to self-isolate and it’s a snowball effect,” she said. “You have too much stuff, then you isolate, and when you feel bad, you gather more stuff.”

If you’re feeling ready to reduce your clutter, here are seven tips to get started.

Botelho recommends not saying you’ll spend 15 minutes a day clearing the garage out. When you do that, she said, much of your time ends up being spent in figuring out what to keep and what to throw or give away For example, she said, if you say you’ll work for 15 minutes as much as 10 minutes can be spent just thinking about what you’ll get rid of.

Instead, she suggests setting a goal for a specific number of objects to remove. “If you make it task-oriented and say today I’m going to pull five items out of this (space), then it doesn’t matter how much time it will take,” she said.

A quick way to kill your enthusiasm for clearing room is to try to clean out an entire space at once.

Don’t do that, says Botelho. Instead, focus on small tasks that collectively lead up to big results. Choose a category – like food containers – and work on that until you can see progress.

“Start where you’re at and go slow,” she said.

Some people have specific items that they over-collect, said Botelho. Typically, those items can also be harder to let go of. The most common clutter-producing category she sees among people is food containers, Botelho said, often because people feel they can use them again.

People think, “I can reuse this to store items, for food storage, to eat out of or to organize food,” said Botelho. But often the containers pile up and become part of the home’s disorganized state.

Instead, Botelho said, “See how many containers you’re keeping to use sometime in the future and if you can’t use them within two weeks, throw them away or recycle them.”

Paperwork is one of those things that is easy to collect and difficult to let go of for many people. To deal with the overflow, Botelho recommends getting a simple shredder and shredding paper as soon as you’re done with it.

Never let it become a pile, she said. “People hold onto paperwork because they’re afraid of someone stealing their identity,” said Botelho. But so much of it is unnecessary.

“Don’t let it grow into unmanageable piles,” she said.

Botelho is firm about this tip which she refers to as “raccooning.”

“Don’t bring any trash into your home, thinking that it’s a treasure and you’re going to fix it up,” she said. “No raccooning. That’s my number one rule. People do it a lot because they want to fix it, but those things never get fixed.”

It’s tough to let go of clothing you once loved but that no longer fits you. Resist the desire, says Botelho, for space reasons and because it holds an emotional message.

“If looking at those piles of clothes makes you feel bad about yourself, get rid of them,” she said. “You don’t need to be surrounded by negativity. Let it go. If you’re able to lose the weight and get down to a smaller size again, then treat yourself to a new wardrobe.”

Asked if she gets rid of clothing that she hasn’t worn in a year – a favorite tip of organizers – Botelho said she doesn’t wait that long.

“I have a box in the basement to put anything I don’t want. That’s the donation box and once it’s filled, we move it along,” she said, adding that the entire box is brought to a donation site.

And Botelho’s favorite clothing-related tip is to organize your clothes in ways that help you enjoy them more. “My closet is organized by color and sleeve-length and it makes getting dressed in the morning a breeze,” she said. “I knew I wanted a white shirt this morning and I can find it easily.”

In our consumer-oriented world, this is a difficult one. But, “don’t feel the need to compete with other people,” says Botelho.

“Purchase items that resonate with you and not because someone else has them,” she said. “It’s okay to change with the styles and seasons, just be realistic about it.”

Finally, don’t go out and buy items to help you clear out your space.

“You shouldn’t have to buy an item to organize your home,” Botelho said. “That’s the exact opposite of what we’re supposed to be doing.”

If you need help or just want to connect with others struggling with clutter, Botelho leads a free support group that addresses clutter and hoarding. Reach out to Brittany Botelho at 508-961-3136 or email bdejesus88@yahoo.com to learn more.

As you get started, remember to take it one step at a time and keep in mind Botelho’s most important message for people with clutter in their lives.