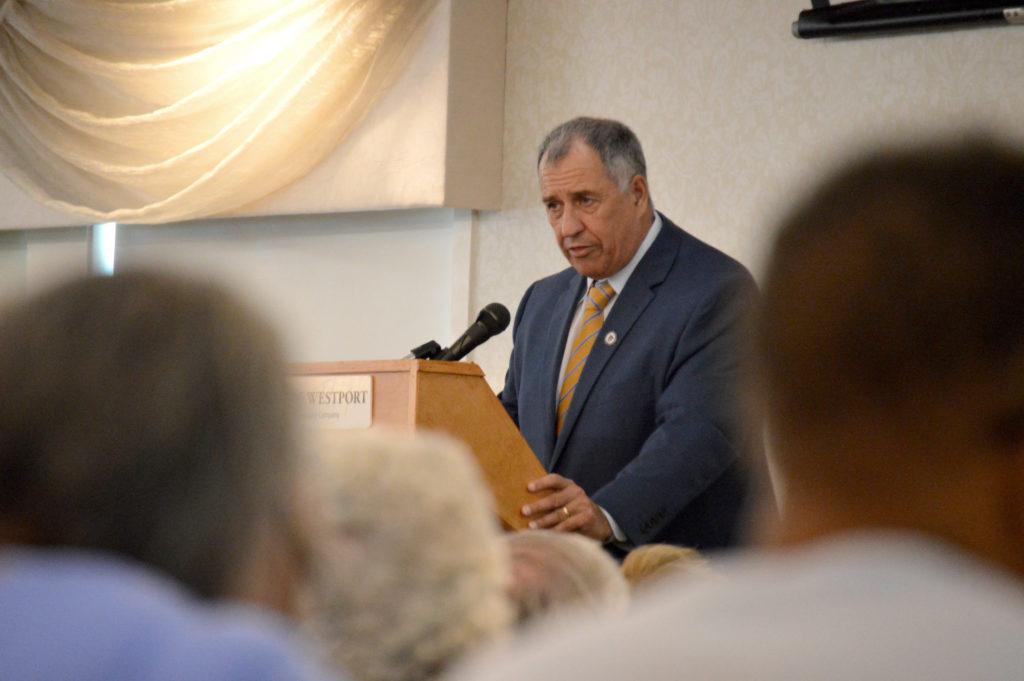 This article originally appeared in the July 2019 edition of Senior Scope. Article and photo by Seth Thomas.

At a recent resource fair, state officials urged the audience to exercise caution when picking up the phone.

The Bristol County Celebration of Seniors, now in its fifth year, is a resource fair co-hosted by the Bristol County District Attorney’s Office and Coastline. The event drew a crowd of more than 600 at White’s of Westport, where participants listened to guest speakers and met with more than 90 vendors.

“I believe all citizens of Bristol County, especially our seniors, need to feel safe and secure in their communities,” said Bristol County District Attorney Thomas Quinn III. “Nationally, five million seniors are victims of elder abuse. Through prosecution and prevention, we hope to reduce this. This conference is about knowing what resources are available, so we can avoid having people become victims of abuse.”

Quinn formed an elder abuse prevention and investigation unit back in 2016, which consists of prosecutors and detectives who specialize in cases of elder abuse. Quinn believes the unit has “put a big dent in holding people accountable.”

He also urged the audience to be more aware of scams to better protect yourself.
“I’ll give you a tip: don’t answer the phone unless you know who’s calling. That would avoid a lot of trouble,” said Quinn.

She reminded the audience that elder abuse is not just physical abuse, but includes financial abuse and neglect.

“Elder abuse is a huge problem, and it’s something that we take seriously at the Executive Office of Elder Affairs,” said Devine. “We administer the Elder Protective Services program, which helps look into these cases. We have a 24/7 hotline that’s available at 1-800-922-2275.”

Mike Festa, President of AARP Massachusetts, noted that prevention is key to protecting yourself.

“If you’re already talking to the district attorney or the police, you’ve lost. They try as hard as they can to get the money back, but it’s gone,” said Festa.

AARP maintains a free resource called the Fraud Watch Network, which provides up-to-date information about what scams are happening throughout the state and country. Festa said that by educating yourself, you’re less likely to fall for scams – and less likely to lose money.

He also echoed Quinn’s suggestion: if you don’t know the caller, just hang up the phone.

“Scammers want you to stay on the phone,” said Festa. “They will sell your phone number, and other scammers will go after you.”