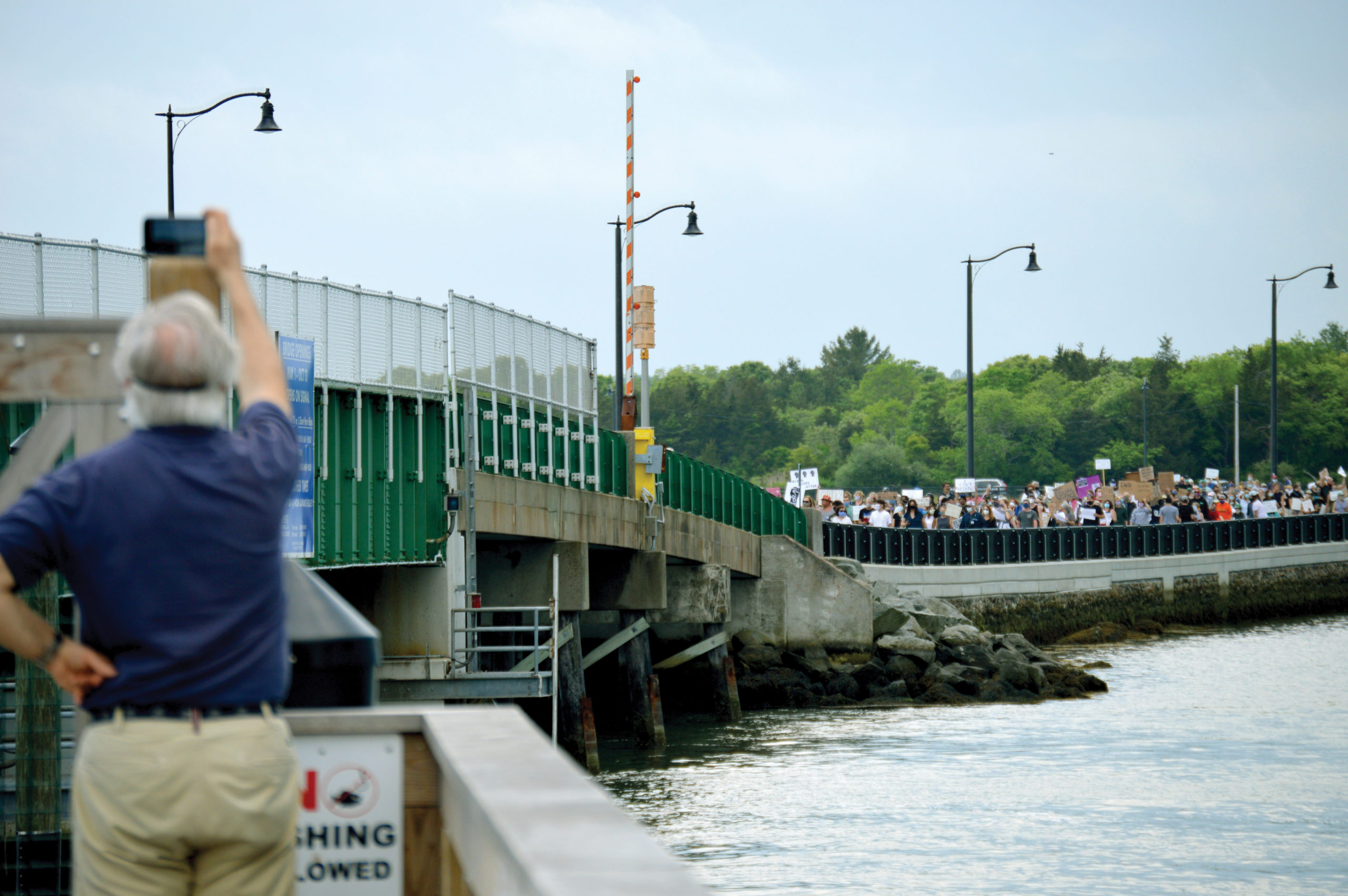 A man films a long line of protesters marching over the Padanaram Bridge in Dartmouth on June 7.

This article originally appeared in the July 2020 edition of Senior Scope. Article and photos by Seth Thomas.

Citizens of the Commonwealth slowly emerged from quarantine starting on May 18 as part of Governor Charlie Baker’s four-part phased reopening plan. As residents cautiously returned to malls and restaurants in Massachusetts, the coronavirus continued to impact other parts of the U.S. and nations throughout the world.

By the final week of May, there was little sign that SARS-CoV-2, the virus that causes COVID-19, was slowing its march across the globe. As the nations that were affected early on in the crisis began to slowly lift quarantine restrictions, cases began to surge in Latin America and South Asia.

At the same time, the public’s attention was suddenly diverted to a different, but in many ways related, story in the United States.

George Floyd, a black man from Minnesota, was killed on Memorial Day after police pinned him to the ground during an arrest. Video footage of the event, depicting Derek Chauvin, a white officer, blocking Floyd’s airway for nearly nine minutes, prompted public outrage, and protests were organized in Minnesota the following day.

Floyd’s death quickly gained traction in the press, and anti-racist demonstrations and protests against police brutality spread across the country. The movement garnered international attention, and during the first half of June, demonstrations had been held everywhere from New Bedford to the streets of London, Tokyo and Tehran.

The widespread public outrage was not contained to Floyd’s death, however. Throughout the first few months of the pandemic, COVID-19 had emphasized the ways that systematic racial inequality has created disparate health outcomes for African Americans.

The APM Research Lab, in a June 10 report that compiled mortality data in the 43 states where it was available, concluded that African Americans were dying at twice the rate of white Americans. The COVID Tracking Project found that, while African Americans make up about 13 percent of the U.S. population, they account for 24 percent of all deaths – or at a rate “nearly two times higher than their population share.”

Complicating this research is the fact that, throughout the crisis, many states were reporting incomplete information. A little over a week after the protests began in Minnesota, Robert Redfield, the director of the Centers for Disease Control and Prevention, addressed the absence of data.

“I personally wanted to apologize for the inadequacy of our response,” Redfield said during a House Appropriations subcommittee hearing on June 4. “The data is the roadmap. It’s fundamentally the first key step that we need to do to address the health disparities.”

On the same day, the Trump administration established requirements for states to report more complete demographic data on those tested, including race, ethnicity, sex and age. 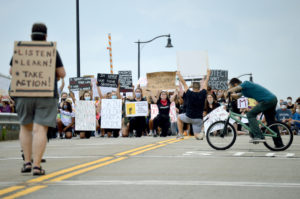 The protests alarmed some public health experts, who believed the country was risking further spread of COVID-19. But there were some early signs that reopening measures in general were leading to more cases.

On June 12, the CDC issued new guidance for gatherings, whether it’s a protest or a backyard barbecue, and warned that “the more closely you interact with others and the longer that interaction, the higher the risk of COVID-19 spread.”

“I know people are eager to return to normal activities and ways of life,” Redfield said. “However, it’s important that we remember that the situation is unprecedented and that the pandemic has not ended.”

By the second week of June, about 20 states, mostly in the South and Midwest, were seeing an increase in cases, some of which was attributed to an overall increase in the number of tests performed. But in some states, including Arizona, Texas and Florida, the number of positive cases increased along with the increase in testing. On June 16, those three states reported their highest single-day increase in new cases.

As the public wearily walked the tightrope between reopening the economy and flattening the curve of new infections, researchers at the National Bureau of Economic Research (NBER) declared that the U.S. was in a recession, ending a historic 128-month period of economic expansion.

“The committee recognizes that the pandemic and the public health response have resulted in a downturn with different characteristics and dynamics than prior recessions,” the NBER wrote in a release. “Nonetheless, it concluded that the unprecedented magnitude of the decline in employment and production warrants the designation of this episode as a recession.”

Toward the end of June, as Massachusetts restaurants were given the green light to allow indoor seating, governors in other states were urging residents to stay vigilant about wearing masks and to limit trips outside their homes. Governor Roy Cooper of North Carolina extended the second phase of its reopening plans for three more weeks.

“In the first month of this outbreak, less than 10,000 cases were reported to WHO. In the last month, almost 4 million cases have been reported,” said World Health Organization Director-General Tedros Adhanom Ghebreyesus during a media briefing on June 24. “We expect to reach a total of 10 million cases within the next week.”