Stepping up for Falls Prevention Week 2022

Falls may not seem like a major health concern, certainly not the same as having heart disease or cancer, until you hear of a friend, family member, or perhaps a neighbor, who ends up in the hospital for a week or more with serious health impacts from falling in their home.

And then you might wonder about your own balance, home environment, and if it could happen to you. 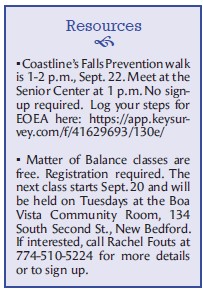 According to several state and U.S. organizations, falls are a major concern for older adults in the U.S. and our healthcare system. About one in four adults, or 28%, age 65 and older report falling each year, an amount that represents about 36 million falls each year, according to the Center for Disease Control and Prevention. In Massachusetts that percentage is only slightly less at nearly 26%.

About 37% of those who fall reported being injured and needing medical treatment for at least one day, which translates to about 8 million fall injuries, the CDC said. More than 3 million adults, age 65 and older, are treated in emergency departments each year.

In Coastline Elderly Services’ service area, between 11 and 15% of all consumers fall, according to nursing supervisor Samantha Oliveira. Of those who fall, 40-60% are injured, she said.

Coastline addresses falls prevention with every visit it makes to older adults, Oliveira said, and then targets its prevention tips and information to the individual’s needs, based on a thorough assessment process.

One recommendation for preventing falls is to find a good balance and exercise program. In the SouthCoast, Coastline offers one called Matter of Balance that is an evidence-based program through the Healthy Living Center for Excellence.

Matter of Balance brings participants together for eight weeks to focus on how to prevent falls, and increase balance, strength and flexibility. The class combines discussion with exercise and group interaction.

Participants say one of the best benefits from Matter of Balance classes is learning they’re not alone with their fears of falling, according to Rachel Fouts, program instructor and community program manager at Coastline.

“They’re meeting other people and finding out that they’re not the only ones that are worried about falling,” said Fouts about the class. “They get ideas from each other. They really support each other, getting together, hearing common concerns, and also brainstorming together.”

“Some people make friends with each other, exchange numbers and go for walks together. They feel a little more inspired to take charge of their health,” she added.

Talking about falls in the home is important because most falls occur there, according to the Mass. Executive Office of Elder Affairs (EOEA), which says 60 percent happen in the home, 30 percent in a public setting, and 10 percent in a health care center. 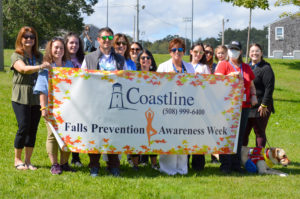 Each year in September, the U.S. recognizes Falls Prevention week as a way of raising awareness of falls and helping people learn to prevent them.
This year, the awareness campaign falls from Sept. 18-24 with a statewide campaign and annual step challenge, now in its fourth year. Last year, EOEA said it almost doubled its goal, collectively taking 43,352,487 steps. For 2022, it stepped up its goal to achieve a statewide total of 45 million steps.

Coastline plans to help out with a Falls Prevention walk at 1 p.m. on Sept. 22 at Buttonwood Park. Walkers can meet at the Senior Center.
Both Fouts and Oliveira have proactive tips for anyone concerned about falling to consider implementing: