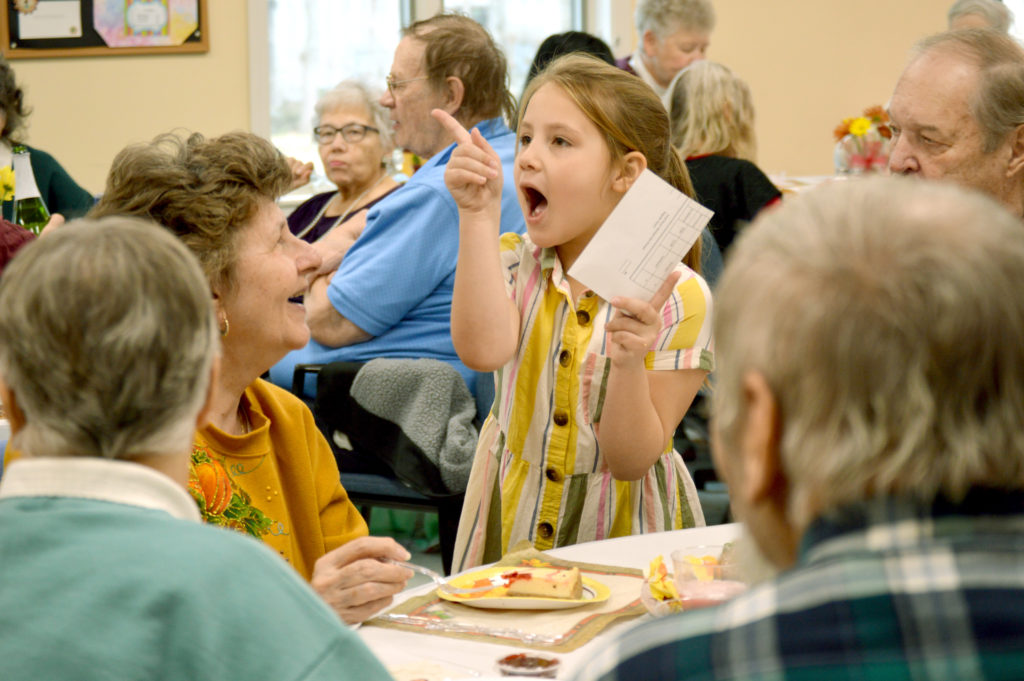 Seven-year-old Breanna Vento calls out dessert orders to her mom on Thanksgiving morning at the Fairhaven Council on Aging. Vento, along COA Director Anne Silvia and her family, served meals on the holiday.

This article originally appeared in the January 2020 edition of Senior Scope. Article and photos by Seth Thomas.

It was nearly 1 p.m. at the Fairhaven Council on Aging, and 7-year-old Breanna Vento was running back and forth between a pushcart loaded with slices of pie and cheesecake. Vento was busy taking dessert orders from the crowd who gathered on Thanksgiving Day for a meal.

Vento took on her role as waitress-for-a-day with great enthusiasm, saying she had a hard time sleeping the night before.

“I was excited about spending time with the seniors,” she said in between serving sweets and choosing raffle winners. “It’s like we’re a part of their family. It’s good to volunteer.”

Vento was one of many who volunteered throughout the South Coast on Thanksgiving – as well as one of many who were all connected by an elaborate effort that began nearly 27 hours prior to the dessert cart making its rounds at the Fairhaven COA.

The Giving Thanks Ministry, which is comprised of various church groups in the area, has prepared meals on Thanksgiving for the past 21 years. The project initially started small, serving less than 100 meals on the holiday. This year, the group coordinated with hundreds of volunteers to produce and deliver approximately 3,400 meals.

“We started off in a little church downtown,” said Glen Parker of the Giving Thanks Ministry. “We started off with a four-burner stove that we had to light with a piece of newspaper. Now everything is done to food spec.”

About a decade ago, the Greater New Bedford Regional Vocational-Technical High School donated its cafeteria space and equipment so the group could accommodate demand.

Parker, who was busy directing traffic in the school’s parking lot, said that decades ago his church group was searching for a way to give back to the community.

“There was an ad in the paper from Coastline looking for volunteers,” said Parker. “We called the next day and said ‘We’re your volunteers. What do we need to do?’” 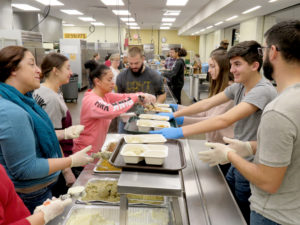 The Giving Thanks Ministry and its network of volunteers prepared more than 3,000 meals at the Greater New Bedford Regional Vocational-Technical High School cafeteria on Nov. 27 and 28.

The project kept expanding over the years, and other churches and community organizations joined the effort. The night before Thanksgiving, more than 350 volunteers flooded the cafeteria to chop 72 pounds of onions, peel 1,100 pounds of potatoes, cube 1,300 pounds of squash and debone 140 turkeys. Assembly lines had formed along the cafeteria tables, where brown paper bags were packed with cutlery and plastic cups filled with cranberry sauce.

Nathan Medeiros, who served as the head chef for the project, said planning began back in early autumn. He spent the evening darting around the cafeteria, coordinating volunteers and troubleshooting.

“Everything’s homemade, and we don’t cut corners,” he said.

Each part of the meal is prepared in waves. Vegetables are peeled and chopped toward the front of the cafeteria while turkeys are cooked, cooled and processed toward the back. The group is ever-changing its strategy to increase efficiency. They adjusted the menu this year, swapping out apple crisp with a no-bake pumpkin mousse in order to make more ovens available for turkeys.

As Mederios answered questions for Senior Scope, volunteers rushed by asking the chef a barrage of questions of their own: “Which celery should we use?” “How many boxes do you think we should open?” “How much pumpkin mousse are we making?”

Medeiros remained unfazed as he was pulled in every direction. “I started doing this when I was a teenager. I’m 39,” he said, before trailing a group of volunteers into the depths of the kitchen.

Many of the event organizers noted how the whole operation is a delicate balance. If the Ministry attracts too many volunteers, meal prep can become chaotic. The group has found that little publicity and word of mouth typically draws the right number of people.

“The process of all this is amazing to me,” said Tony Anselmo, a local Cub Scout leader who was there with his troop, in between cubing squash. Each ingredient is prepared in waves and nearly every flat surface in the extensive high school cafeteria had been transformed into a work surface.
Anselmo said his group joined the effort a few years ago and volunteering at Voc-Tech has become a yearly tradition.

“We have to do our part to give back to the community, especially for those who don’t have their families with them this time of year,” he said. “You can’t describe it. Giving back is awesome.”

The first night, the majority of volunteers wrapped up by 10 p.m. By the early morning hours the next day, another wave of people gathered in the cafeteria to plate the meal. This part of the process looks similar to what one would expect in a high school cafeteria: a long line of people snaking its way from serving station to serving station, stopping to hold out their plastic trays to receive piles of steamed vegetables and turkey. The meals are topped with gravy before they’re sealed and bagged.

In addition to providing the trays and sealing machines, Coastline generates routes for volunteer drivers to deliver the bagged meals. More than 50 drivers took part in this year’s effort, including at least one Grammy winner. 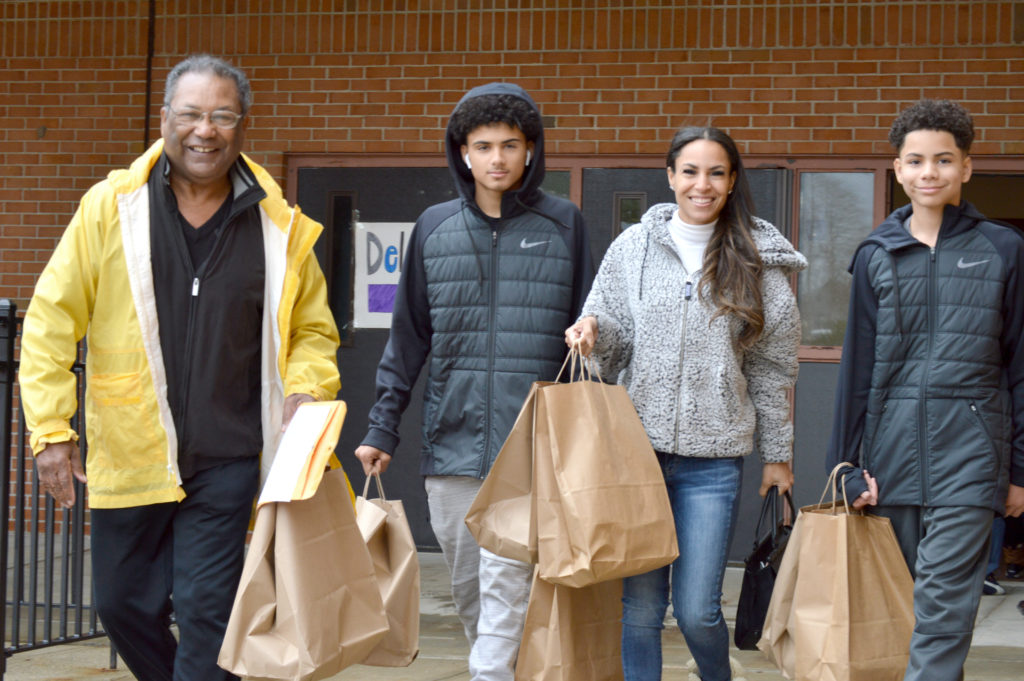 Ralph Tavares arrived that morning with his daughter and two grandsons to deliver meals. Tavares, who sprang to fame in the ‘70s and ‘80s with his four brothers as part of the musical act Tavares, said it’s good to give back. Sometimes, he’s even recognized when out delivering meals.

“I’ve enjoyed delivering meals and doing what I can. It gives you another perspective on life,” said Tavares. He left the music industry in the mid-80s to pursue a more stable career at the New Bedford Superior Court where he worked as a court officer. He said he got involved with the Thanksgiving project decades ago through that job.

He still tours with his brothers, estimating that he was booked for about 50 shows in 2019. The week after Thanksgiving, he was off to perform in Tennessee and South Carolina. Even with major-label records and chart-topping singles under his belt, this Thanksgiving, he was happy to be with his family as a volunteer in his community.

“I’ve had a great life,” he said. “I’m so thankful that God has blessed me and my family the way He has.”

Rena Jacobsen, decked out in a Christmas elf hat, delivered meals that morning throughout New Bedford. She said she’s been involved with the program for the past seven years.

“It’s Thanksgiving, a time to be thankful for what you have and give to others if you can,” she said. “I think it’s a great program. Well worth a couple hours of our day.”

Rain began to fall as Jacobsen made her way to Kenneth Babineau’s front door. Babineau smiled when he opened the front door to find Jacobsen holding a brown paper bag.

“I appreciate this. I really do. It helps out a lot,” he said. “This is personal. It’s really nice.”

In addition to home deliveries, large trays of food are prepared and delivered to three locations: Tripp Towers, Boa Vista Apartments and the Fairhaven Council on Aging. 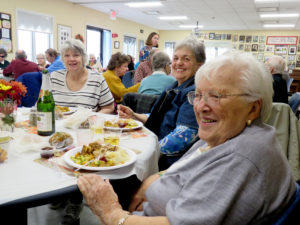 The activity room at the Fairhaven COA was packed on Thanksgiving morning. Volunteers made at-home deliveries, and meals were served at three congregate locations. From left: Diane Edwards, Cynthia Lundrigan and Dorothea Machado.

As Fairhaven COA Director Anne Silvia and her family (as well as the young waitress-for-a-day, Breanna Vento) served food from the Giving Thanks Ministry, recipients of the meal said the whole process is extraordinary.

“They give their holiday to serve us. It’s really wonderful,” said Diane Edwards, with one of the 3,400 meals placed on the table in front of her. “Everybody that comes appreciates it. They know that it’s not just whipped up. There’s a lot of hard work involved.”