The Time to Fill Out The Census is Now 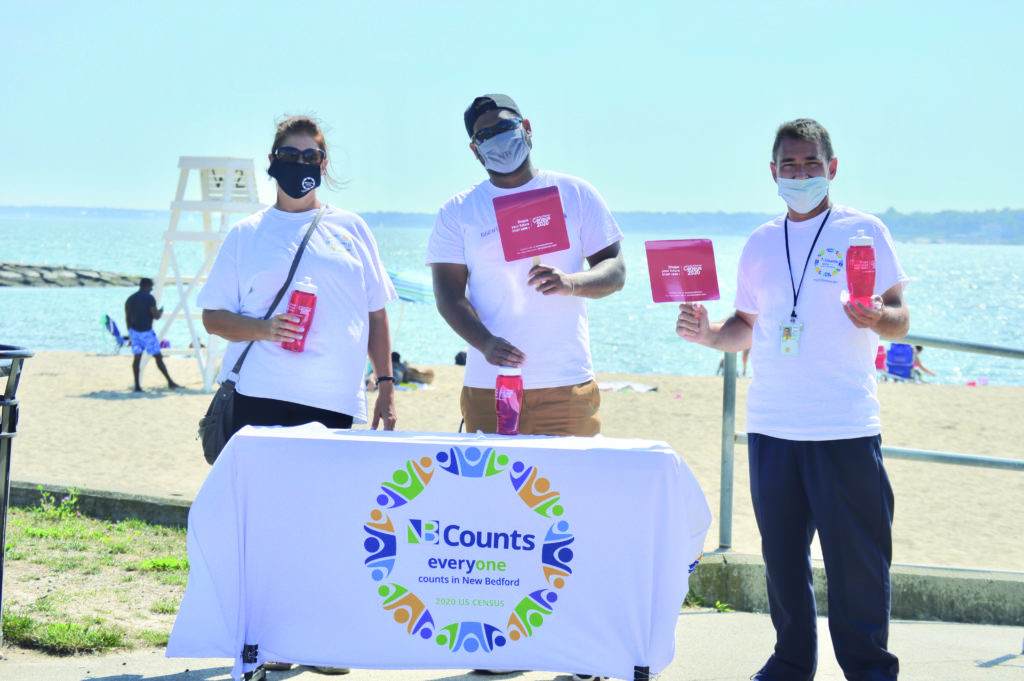 New Bedford Counts, the City’s census-counting effort, was here, there and everywhere this summer in an effort to count people ahead of the new deadline for the 2020 Census, which is now Sept. 30. On Aug. 22, the group visited Market Basket before heading over to West Beach. Pictured from right: Lynn Coish, Algenys Martinéz, and Jose Da Cunha.

This article originally appeared in the September 2020 edition of Senior Scope. Article and photo by Seth Thomas.

The 2020 Census offers more ways to complete the once-a-decade population count than ever before. Back in mid-March, the public began self-responding over the internet and over the phone – both options a first for the 230-year-old process. But COVID-19, much in the same way it disrupted nearly every other aspect of American life, upended the original census timeline.

“COVID has changed things rather dramatically,” said Jeff Behler, director of the U.S. Census Bureau’s New York Regional Office. “We should have started knocking on doors on May 13, and we should have been done with data collection at the end of July. Clearly, that couldn’t have happened when we couldn’t do it safely.”

Initially the U.S. Census Bureau had pushed its deadline for field operations from July 31 to Oct. 31. “Enumerators,” or census takers, only began knocking on doors in early August. But, around the same time, the bureau reversed course, announcing it intended to end field operations a month early.

This means that the deadline to fill out the 2020 Census is now Sept. 30.
U.S. Census Bureau Director Steven Dillingham wrote in a statement that the bureau was ending both field operations and self-response options at the end of September in an effort to keep with original deadline of Dec. 31, when the census is required by law to provide its data to the president.

The Trump administration had asked Congress for a deadline extension back in April, but the effort eventually stalled in the Senate. With lawmakers divided on the issue, the Census Bureau pressed forward with its plan to meet its original December deadline.

Census workers are now tasked with counting the remaining households, many of whom belong to groups that are considered “hard to reach,” such as young children, non-English speakers and renters. Nearly four out of 10 households had yet to be counted by mid-August.

For those who have yet to self-respond, you can expect a visit from an enumerator. Field workers have received COVID training and will be wearing a mask (regardless of local mask mandates) and will be following social distancing protocols.

“We also are giving our census takers small packages of masks that they can give directly to the respondent if they prefer to complete the interview with a mask on and they don’t have one,” Behler said.

Enumerators wear an official photo ID and carry a smartphone, both of which feature a U.S. Dept. of Commerce watermark. They will be carrying an official census bag as well. If you want to confirm an enumerator’s credentials, you can call 212-882-7100, and the Census Bureau can verify that person’s employment.

In New Bedford, where the self-response rate is around 57 percent (nearly ten percentage points below the state average), census workers have been joining other COVID-relief efforts, such as food banks or testing sites.

On Aug. 14, a long line of people standing 6 feet apart formed down North Street. Seven Hills Behavioral Health was offering free COVID-19 testing as part of Governor Baker’s “Stop the Spread” campaign, and health care workers swabbed citizens in the parking lot of the Boys & Girls Club of Greater New Bedford. Across from the testing site sat a New Bedford Counts booth, where city workers and an official census enumerator were encouraging those who arrived for a COVID test to fill out their census. In three hours, they collected data on 32 people.

Lynn Coish, census outreach coordinator for the City of New Bedford, stressed that the 2020 Census will determine the fate of funding for federal programs for the next decade.
“Being counted is about getting more for your family and community over the next ten years and paving the way for the next generation,” said Coish. “Everything that’s going on in the country right now is reason to fill out the census.”

At the New Bedford Counts events, the group is always joined by an official enumerator, who uploads information directly to a protected database. Data collected in the census is protected by Title 13, a federal law that was enacted in 1954. Under Title 13, the U.S. Census Bureau cannot release data that would identify an individual or household. State or federal law enforcement, which includes the IRS, ICE, Homeland Security, local housing authorities, and city governments, cannot access identifiable information.

Moreover, the enumerators themselves are obliged to take an oath of confidentiality. If they were to release any information that identifies a person or household, they will be fined up to $250,000 and could face a prison sentence for up to five years.

This “head count” is used in a myriad of ways. It determines the number of seats each state has in the U.S. House of Representatives. Massachusetts lost seats in three of the past four census counts, dropping from 12 congressional seats in 1980 to the current count of nine.

The data is critical in determining the state’s share of billions in federal funding, which impacts hundreds of programs, including Medicaid, SNAP and Head Start programs, as well as funding for hospitals, schools, and roadways.

And while the 2020 Census is often noted for being the first to be made available online, you do not need the internet to self-respond. You can simply pick up the phone.

“You’re going to talk to a live person. They’re going to be basically interviewing you over the phone, asking you the questions as if you were filling out the paper form,” said Behler. “If for some reason you can’t get through to a person, you can leave a message and a census representative will call you back.”

The deadline for the 2020 Census is Sept. 30. You can self-respond now online or by phone.