COVID-19 Vaccine Rolls Out During Phase 1 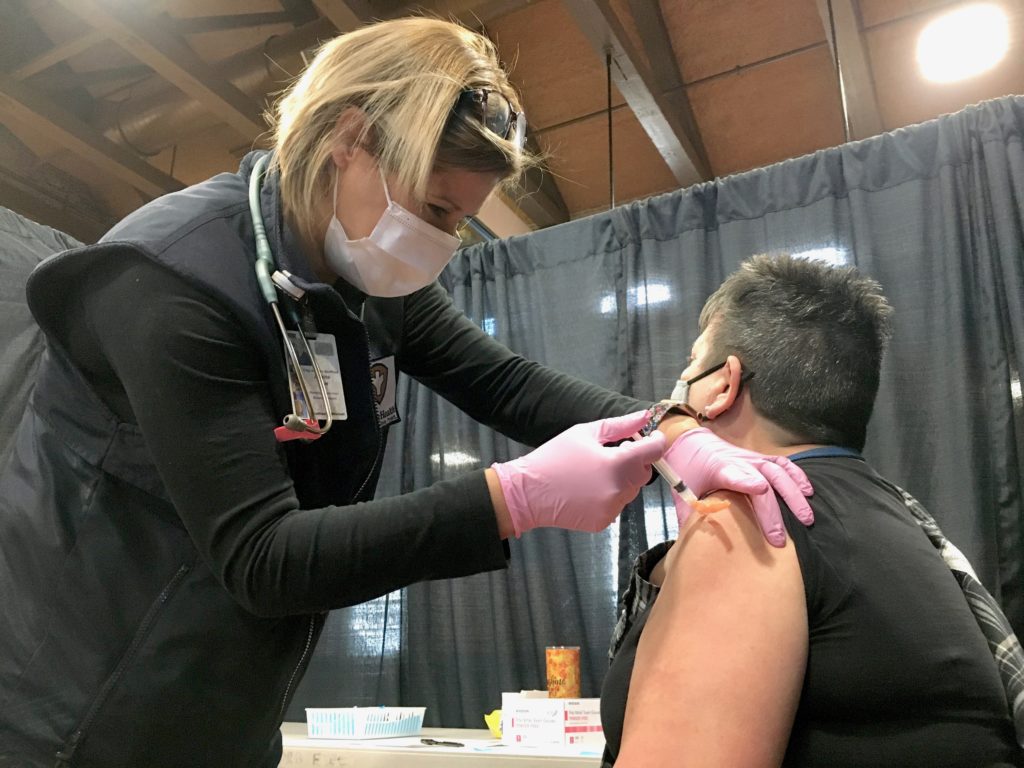 This article originally appeared in the February 2021 edition of Senior Scope. Article and photos by Seth Thomas.

The nation entered a new chapter in the global COVID-19 pandemic this winter as vaccines began to slowly roll out for select segments of the population.

The vaccine brought with it a beacon of hope in a year-long crisis that has disrupted everyday life, infected over 100 million people across the globe and killed more than 420,000 Americans. The vaccine also came coupled with a lofty logistical challenge as states attempt to administer the vaccine quickly and equitably.

By Jan. 21, exactly one year after the Centers for Disease Control and Prevention confirmed the first case of COVID-19 in America, all of those in Phase 1 of Massachusetts’ vaccination strategy became eligible for the shot.

The state has been formally preparing for this moment since October when it established the COVID-19 Vaccine Advisory Group. The group developed a timeline, which offers a rough estimate of who should receive the vaccine first based on who is most vulnerable and how to best maintain the health care system as a whole.

In December, the Food and Drug Administration authorized the Pfizer-BioNTech and Moderna vaccines for emergency use. Both vaccines require two shots, administered 21 days and 28 days apart respectively.

At the top of the priority list were frontline health care workers, approximately 2,900 of whom died in 2020, according to an analysis by Kaiser Health News and The Guardian. Around Christmastime, the vaccine became available to residents and staff of long-term care and assisted living facilities.

Annabella Dougherty, director of Coastline’s Nursing Home Ombudsman Program, advocates for those living in 16 area nursing homes and two local rest homes. Nursing homes have been especially impacted throughout the pandemic, and nearly all the concerns she has fielded in recent months have been COVID-related.

“We’re still here to advocate for the residents and their families,” Dougherty said. “If they have any concerns, don’t be afraid to reach out. We can resolve issues over the phone.”

While Dougherty and her team of seven volunteers have been able to consult with residents via video conferencing apps like Skype and FaceTime, she’s looking forward to interacting with people directly. Jen Davis, the administrator of Sacred Heart Skilled Nursing & Rehabilitative Care in New Bedford, said that she, too, is looking forward to restrictions loosening.

“We very much see [the vaccine] as the biggest and best move in the right direction that we’ve seen in quite a while,” said Davis.

Through a federal vaccination program, nursing homes like Sacred Heart partnered with either CVS or Walgreens. Davis said that CVS managed two clinics at Sacred Heart thus far, with a third and final clinic on the way in February. The vaccine was delivered directly to residents who wanted them in their rooms and at a clinic for staff.

Moving forward, her biggest concern is “separating fact from fiction” regarding the vaccine.

“We need to get people to understand that this was a scientifically driven process, that it’s safe, and that it’s worth doing in the long run to protect yourself and your family…and our residents,” Davis said. “I would encourage anyone that’s able to please get the vaccine and to support health care workers because we’re all still working very hard.”

First responders became eligible for vaccination in mid-January, followed by those in congregate care programs, emergency shelters and prisons, which included prison staff. 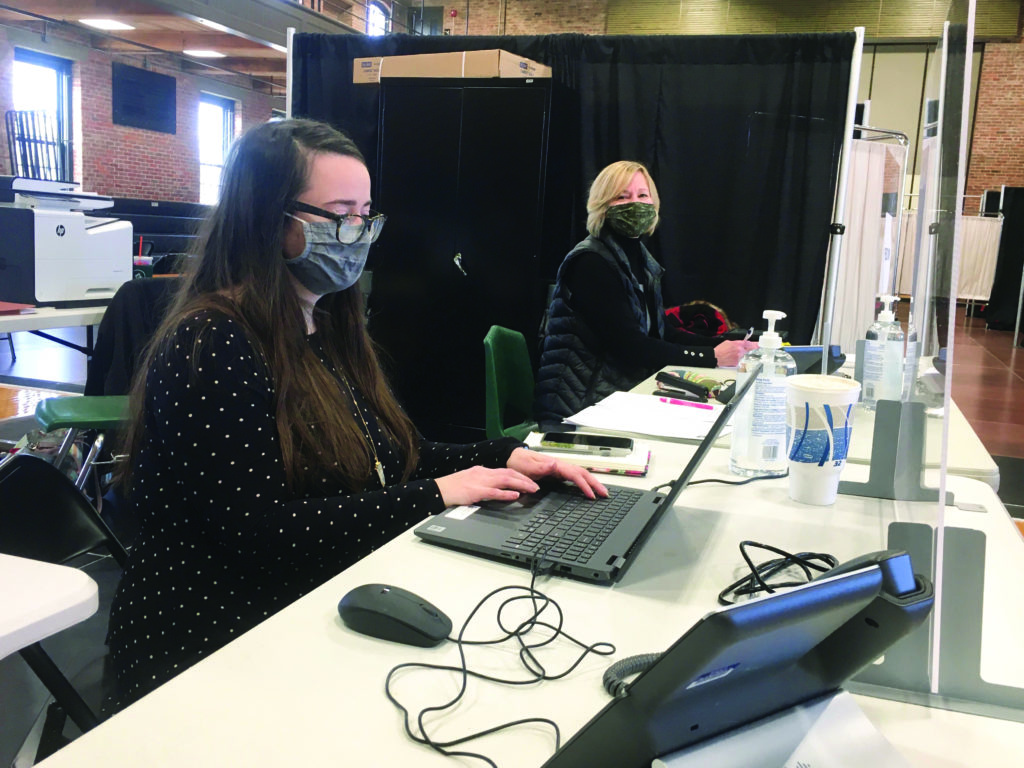 Stephanie Sloan, Assistant Director of the New Bedford Health Department (left) and Rhonda Mcloughlin, a volunteer with Emergency Management (right), check people in at the Andrea McCoy Recreation Center, which was converted into a vaccination site during Phase 1 of the vaccination rollout. About 80 people were vaccinated on Jan. 26.

On Jan. 26, New Bedford’s Andrea McCoy Recreation Center transformed into a makeshift medical center with partition walls dividing the basketball court into separate rooms. There was a waiting room off to one side, a section in the center of the court to administer shots and an observation area toward the back where those who were vaccinated were monitored for 15 minutes to ensure they didn’t have an adverse reaction to the vaccine.

It was a trial run of sorts for the city. Earlier in January, small groups of first responders were vaccinated at the New Bedford Health Department. The spacious recreation center enabled the operation to scale up. New Bedford Health Director Damon Chaplin said once the process is streamlined, they could vaccinate upwards of 60 people an hour at the center.

As the state progresses through Phase 2, Chaplin said the city is planning to assemble a mobile vaccine team that can bring a condensed version of the clinic directly to elderly housing and to low-income populations throughout the city.

“The mobile team will be a combination of the New Bedford Health Department and EMS,” said Chaplin. “We’ll coordinate with the property managers, evaluate their available space and set up a clinic in the buildings.”

“For our elders, we’re going to go to them as best we can. But this facility will be available to those who can get here,” he said, referring to the recreation center.

As local governments work out the details of their vaccination strategy in early February, Chaplin recommends contacting your local health department or council on aging with questions about the rollout.

Chaplin plans to record a presentation with New Bedford Cable Access to provide an overview of Phase 2 and discuss the facts about the vaccine.

“My job is to not trick anyone into doing anything,” he said. “My job is to provide each individual with as much information as I can so that they can make sound decisions for themselves and their families.”

“We’re getting a lot of calls, and unfortunately sometimes we can’t give a definitive answer because we’re working day-to-day,” said Holt. “But we’re gearing up for Phase 2. Everybody will get vaccinated…it just takes time.”