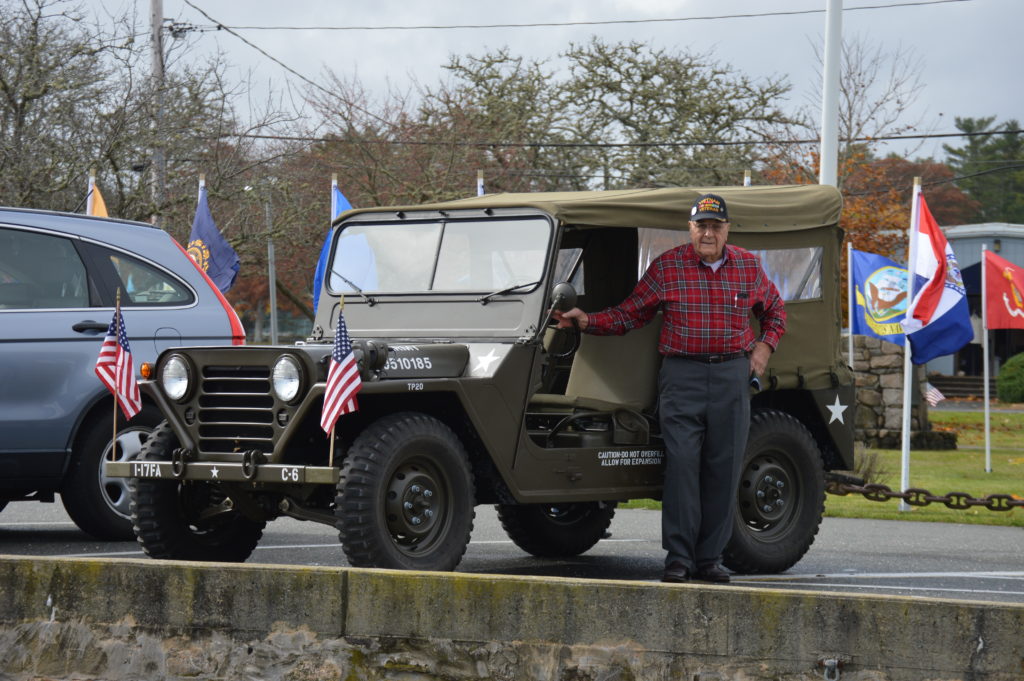 Joseph Napoli, who served in the U.S. Army for 25 years in active duty, arrived at Marion’s Veterans Day drive-through event in a military Jeep. He said he acquired the 1963 model Jeep in the ‘80s from Fort Devens after the military switched to Humvees.

At the beginning of November, COVID-19 cases began to surge throughout the country. Veterans Day, which is typically marked by parades and public ceremonies, looked like it would drift by without much fanfare. However, communities throughout the South Coast were undeterred and recognized veterans as best they could given the circumstances.

Several of the local Councils on Aging typically celebrate by serving big meals and hosting guest speakers. This year, they offered food to go and thanked veterans from the safety of their cars.

On Nov. 7, the Rochester COA’s kitchen was buzzing with activity as meals were cooked and packaged throughout the morning. The kitchen has been less active during COVID. The COA’s popular breakfast program, which draws large crowds, has stopped serving.

Matt Gately, a 39-year-old veteran, first became connected to the Rochester COA through its breakfast program. After becoming a regular customer, he became a volunteer, helping the crew wash dishes. For Veterans Day, he became a chef.

“I think it’s important to take any opportunity to help someone, especially veterans,” said Gately. “Before I was even born, they were putting themselves in harm’s way so that I could have a good life. That’s something that means a lot to me.” 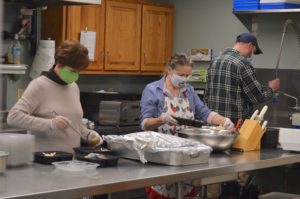 The Rochester Council on Aging provided a drive-through meal for about 50 people in celebration of Veterans Day.

Even without the breakfast program, the Rochester COA has remained focused on food. Cheryl Randall, the director of the Rochester COA, said the center has been hosting small gatherings for coffee and conversation, and they have regularly delivered boxes of food from the Greater Boston Food Bank throughout the pandemic. By Veterans Day, they were ironing out the details of food distribution during the holiday season.

Similar drive-through events happened ahead of Veterans Day at the Dartmouth and Fairhaven Councils on Aging.

“It’s way too important to let it go by the wayside,” said Anne Silvia, director of the Fairhaven Council on Aging, as she assembled to-go bags in the center’s parking lot. “You can’t forget our veterans.” 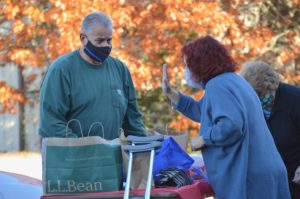 Anne Silvia (right) waves to veterans as they drive by the Fairhaven Council on Aging.

Mac’s Soda Bar had prepared pot roast dinners for vets, and students from LeRoy L. Wood Elementary School had prepared hand-drawn cards to be packaged with the meals. Every bag was topped off with a patriotic pin, previously made by Claire Geggatt from Acushnet.

In a normal year, the Dartmouth COA hosts a breakfast for vets, and the events draws a long list of guest speakers. This year, patrons were welcomed in the parking lot by COA staff, VFW members, the Dartmouth Friends of the Elderly, and Virginia Souza and Aggie Friar, who taught an exercise class for people with osteoporosis at the center. For the occasion, they were in the parking lot holding signs.

Souza said they had helped direct traffic during a prior drive-through event, giving them an opportunity to see their students. While their class has not gathered since the beginning of the pandemic, the two have tried to stay connected to students, sending birthday cards and trying to visit when possible. The signs they held for Veterans Day offered encouraging words. 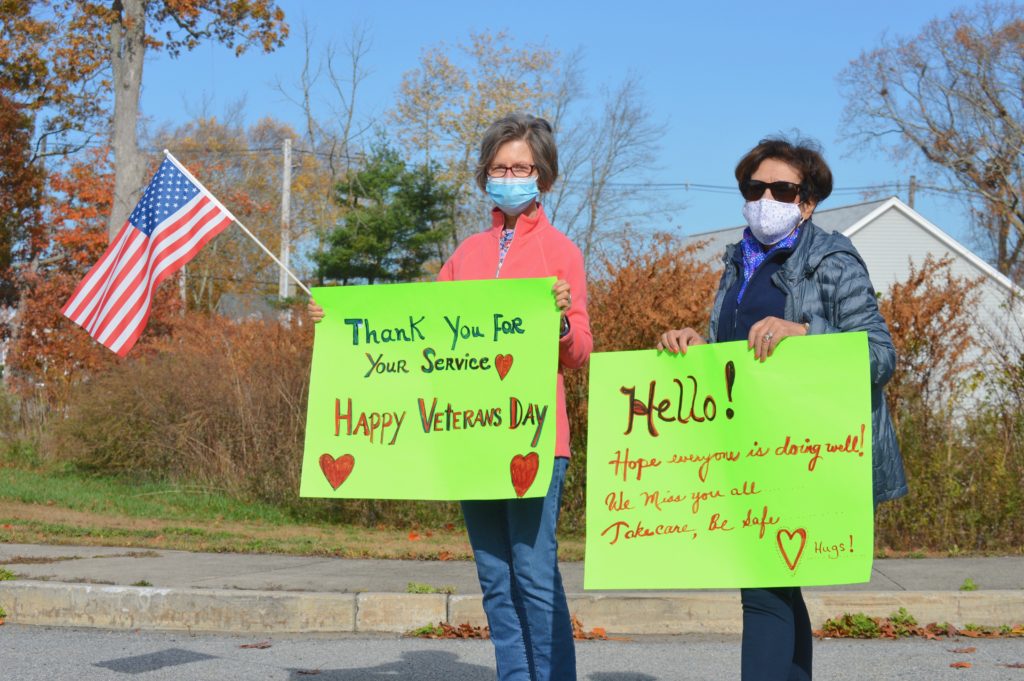 Aggie Friar and Virginia Souza, who before the pandemic taught an exercise class for people with osteoporosis at the Dartmouth COA, held signs thanking veterans and offering positive messages during the center’s drive-through event for Veterans Day.

“We wanted to give them a positive message,” said Souza. “We don’t want them to get depressed.”

In Marion, the COA was stationed by the Old Landing Wharf Memorial. A speaking event, which had been previously scheduled at the site, was canceled to prevent a crowd from gathering. The COA remained, however, to offer meals for veterans who drove past.

Smaller ceremonies honoring veterans happened in Dartmouth, Mattapoisett, and Fairhaven, many of which were recorded and broadcast on local cable access channels. In New Bedford, Mayor Jon Mitchell addressed a small crowd gathered in front of City Hall.

“On Armistice Day itself, people who came together in celebration at the time were wearing masks because that time coincided with the height of the Spanish Flu pandemic,” Mitchell said. “It is especially poignant that people are taking the effort to be here today.”

Had the Veterans Day parade occurred, Tony Enos, a veteran of World War II, would have been the grand marshal. This year, he was the keynote speaker. Enos said he was drafted into the army, but after his physical exam, he was able to choose his service. He signed up for the submarine service.

He talked about the intensity of being part of the submarine service, which had the highest casualty rate of American armed forces during World War II. Losing focus, even when confronting a convoy of enemy ships, was not an option.

“The officer would come back and see if anybody was panicking,” Enos said. “If you showed signs of panic, you were off the submarine service… if you survived.”