Vigilance is key to stopping harm from identity theft

The possibility that someone could steal your personal information and use that to open bank accounts, apply for credit cards, or file tax returns
can be pretty frightening, especially when it is done in ways you may not notice until damage has been done.

It’s very hard to prosecute those who use the identities of others for financial gain, Bristol County DA Thomas M. Quinn III and Assistant District Attorney Michael Scott told seniors at the Dartmouth COA last month during a workshop on the subject. So the best ways to protect yourself is through preventive measures and learning how to recognize identity theft when it happens, they said.

Identity theft can happen when thieves go through trash cans or dumpsters looking for sensitive information they can use, or when information is stolen from a business or medical organization through what is called a data breach.

In 2021, there were more reports filed about identity theft than any other type of fraud complaint, according to the Federal Trade Commission. That means of a total of 5.7 million complaints filed that year, 25 percent, or 1.4 million, involved some type of identity theft. 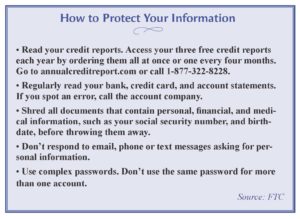 To prevent fraud, it’s important to regularly check your accounts for potential errors that may be the work of thieves. Scott said his identity had been stolen many years ago and used to file tax returns in his name. He worked with the IRS to resolve the situation, he said.

Signs to pay attention to include mistakes on your credit card or bank statements or medical benefits from your health plan; noticing when your
bills or account statements don’t arrive on time; bills or collection notices for products or services you never received; calls about debts that don’t belong to you; a written notice from the IRS that someone used your social security number; mail, email or calls about accounts or jobs in your minor child’s name; or, you are turned down unexpectedly for a loan or job.

“It’s hard to know how to defend yourself,” said Scott. “But be vigilant, especially about your name, date of birth or social security number.”