Community Effort Gets the Ball Rolling at Hazelwood 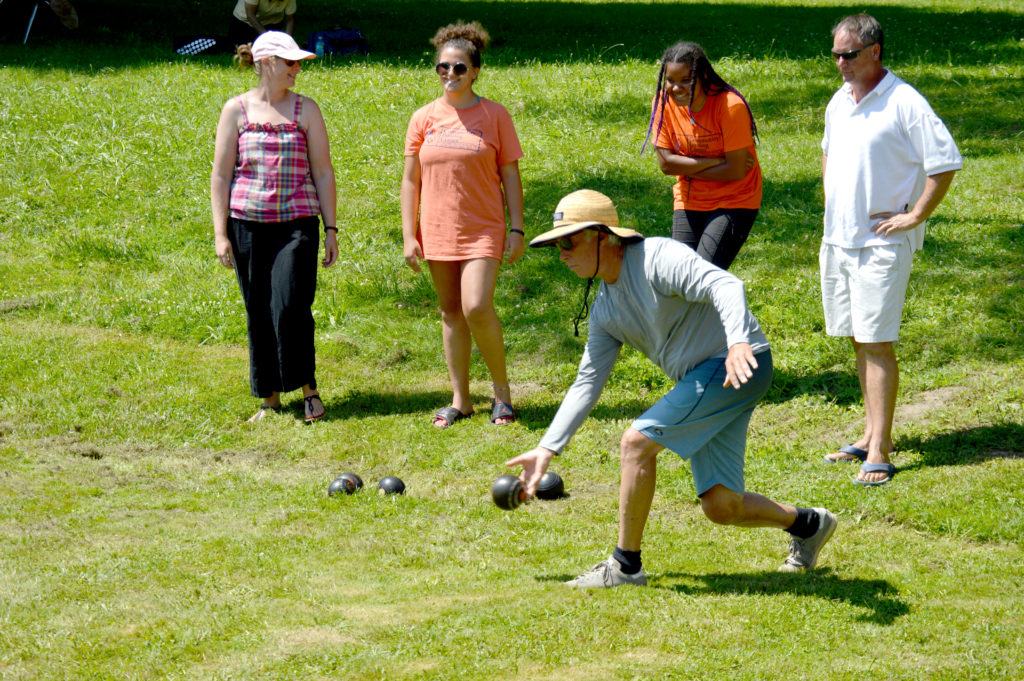 People from every age group gathered at Hazelwood Park on July 9 for a lawn bowling and croquet clinic. Community organizers and New Bedford’s Parks, Recreation and Beaches Department are looking to restore the greens in a bid to revitalize the sport locally and draw professional players from outside the area.

This article originally appeared in the August 2019 edition of Senior Scope. Article and photos by Seth Thomas.

Amid the sprawling field behind the Hazelwood Senior Center, kids, seniors, and everyone in between took turns rolling lawn bowls and swinging croquet mallets.

On July 9, the bowling green at Hazelwood Park had something of a relaunch when children from the nonprofit Youth Opportunities Unlimited took part in an instructional clinic on lawn bowling and croquet from national professionals and local aficionados.

The newly formed community organization Friends of Hazelwood Park, in collaboration with the New Bedford Parks, Recreation and Beaches Department, plans to restore the greens to tournament quality.

“If we can bring it back to its former glory, that’s a resource for the city,” said Chance Perks, chairman of the Friends of Hazelwood Park.

Mary Rapoza, the Director of the Parks, Recreation and Beaches Department, has childhood memories of lawn bowlers gathering at Hazelwood Park. The greens would be packed every weekend, she said.

But interest in the sport fizzled over the decades, and the bowling greens were largely abandoned by players save for one group, Youth Opportunities Unlimited (formally known as Trips for Kids), which has utilized the space for the past 15 years.

“When Trips for Kids began, we were looking for destinations on the South End where kids could have a new experience and we could get them there and back by bike,” said JoAnn Tschaen, who founded the kids’ organization. “Hazelwood Park is a beautiful destination for our youth development program because there is a lot to do here.”

The group was able to secure lawn bowling equipment through donations from local families, and the children showed an interest in forming teams.

“We decided to approach the city and see if we could restore the greens,” said Tschaen. “We saw an opportunity because we discovered that lawn bowling is a sport played all throughout the country.” 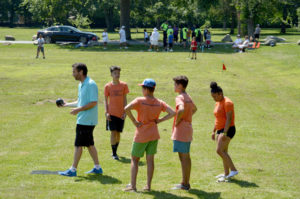 Rapoza said that last year the Friends and the Parks and Rec Department secured a Community Preservation Act grant for the restoration project as well as an anonymous donation of $50,000.

“Right now these are crowned greens, which are more challenging,” said Rapoza. “Even when these greens were being actively used in the city, they were unusual. Now, nobody plays on crowned greens. We’re going to have to get rid of the crowns and create a level playing area. We’re going to create tournament quality greens for both lawn bowling and croquet.”

To build momentum for the project, the city is offering instructional clinics on the greens on Mondays and Fridays in July and August.

While future clinics will focus on lawn bowling, during the kick-off event on July 9, kids also learned the basics of croquet from members of the Marion Mallet Club and professional athletes.

“Everyone was excited about getting croquet in the city,” said Ruth Nicolaci, a member of the Marion Mallet Club. “A hundred years ago, New Bedford was a prominent bowlers’ playground. You don’t have to be an athlete to play either sport.” 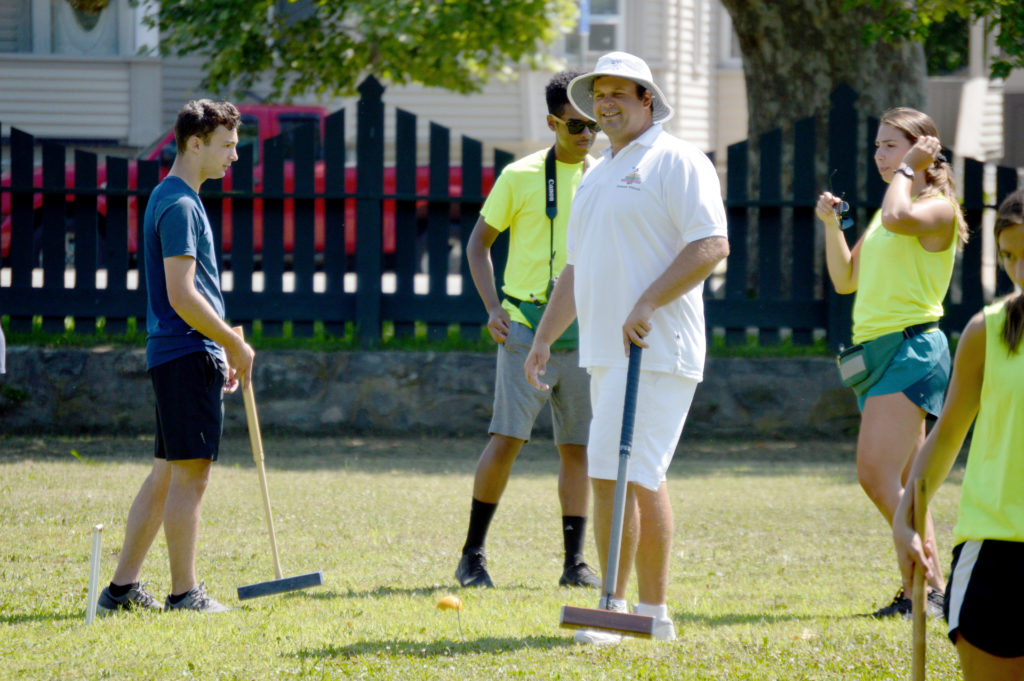 Stephen Morgan (center), a national croquet champion, offers expert advice to children from Youth Opportunities Unlimited at Hazelwood Park. The City and community organizers plan to restore the greens to attract players of all levels.

The Marion Mallet Club invited Stephen Morgan, a national croquet champion, to join them that morning. Morgan was fresh on the heels of his big sweep at the United States Croquet Association’s national championships, which was held in Florida this past March. He won both the singles and doubles competition.

“One of the biggest limiting factors in the sport is access, and this project is going to provide access to people who would otherwise not have it,” said Morgan.

“What makes croquet unique is that it’s sport that everyone in the family can participate in,” he said. “I’ve played games where a seven year old beat his father. Then the grandfather beat the seven year old.”

Maurice Lafond from the New Jersey-based Essex County Lawn Bowling Club was excited to see a new generation of players out on the greens. He said that, while the sport is something that anyone can enjoy, lawn bowling has had an unfortunate history of being exclusionary.

“In the past, they wouldn’t allow kids. That’s a problem that still exists today. If you play in Arizona, you have to be 55 years old,” said Lafond. “That’s what I love about New Bedford. You get to work with kids.”

“With the Hazelwood Senior Center right here, one of our goals is to encourage the seniors to bowl with the youth,” said Rapoza.

The City of New Bedford, which is a member of the AARP Network of Age-Friendly States and Communities, has spent nearly a year implementing an action plan that aims to make the city a more livable place for people of all ages. Part of that plan includes the development of intergenerational programs as well as encouraging older adults to participate in activities hosted in public spaces.

In addition to drawing a mixed crowd to the park, community organizers hope the updated greens will become a destination for players outside the area. Rapoza said as plans for the project began to take shape, it became clear that players from national organizations have been searching for more locations to host leagues and tournaments.

Jerry DeMello, also a player with the Essex County Lawn Bowling Club, said he and Lafond have played in tournaments throughout the country, but they hardly practice because the nearest green suited for play is four hours away.

“Get out there, and try it!” said DeMello.